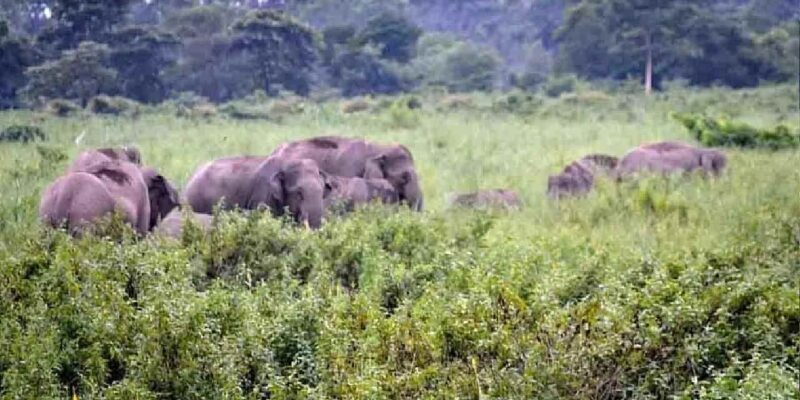 File photo: A herd of elephants in the forest.

Jharkhand (Jharkhand) of Hazaribagh district (Hazaribagh District) in the attack of elephants (Elephant AttackThere is panic in the whole area. The elephant, separated from the herd, crushed to death three men and two women from different villages within two days, while injuring two people. Due to this there is an atmosphere of panic among the villagers. At the same time, the forest department personnel are roaming from village to village near the forest and appealing to the people to be careful. Along with this, information is being given to them that they should not tease the elephant.

According to the forest guard of the forest department, this elephant has been separated from its herd. Because of which he is attacking people fatally. This is the reason why he has killed five people. It is said that till the elephant does not meet its herd and family, it will continue to attack people fatally. Officers and personnel are busy in alerting the people. The lone elephant has been attacking people since its separation from the herd. According to forest department officials, this elephant has been roaming alone for eight months. He is attacking whatever he finds on the way.

Among the dead, Mahavir Birhor of Demotand Birhor Tola of Sadar block was caught by an elephant at 7.30 pm on October 11 and slammed and crushed with his feet. The deceased’s wife Somri Birhorin was picked up by the trunk and thrown. She is battling for life and death. After this, the elephant reached Turaon village on the same night. At around 9.30 pm, villager Ram Prasad was roaming near his house. The elephant also slammed him and crushed him to death.

The families of the deceased will get compensation

Similarly, Vishun Ravidas was killed by an elephant in Sirsi village of Katkamdaag block. In the same village, the villager of Resham village, who was looking after the tomato farm, was injured. On the night of 10 October, Kriti Kujur, a woman from Kuba village of Adera Panchayat was killed by an elephant. Next to this village, the woman of Chichi, Sabutari Devi, was crushed to death. The Forest Department immediately gave 25 thousand rupees to the family of the deceased. The forest department has given immediate compensation of Rs 25,000 to the kin of the deceased killed by the elephant attack for cremation. Later, a compensation of Rs 3.75 lakh will be given to the next of kin of the deceased.

Jharkhand News: Darshan will have to be done according to the guidelines issued for Durga Puja, otherwise legal action will be taken

Women Health: These yogasanas are best for women, definitely include them in the routine

This problem occurred in Ford vehicles, the company recalled 1,26,000 vehicles