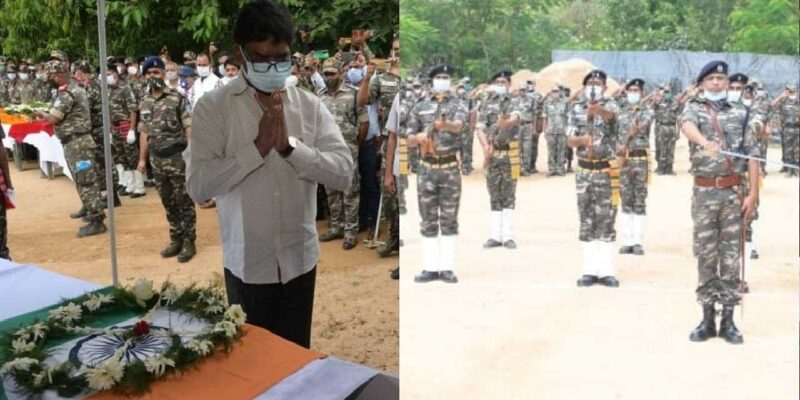 Photo: Heartfelt tributes were paid to Deputy Commandant Rajesh Kumar, who was martyred in the Naxal attack, at the Jharkhand Jaguar Campus on Wednesday.

The senior police officer with tears in his eyes and the accomplices of the late Rajesh sent the body to Munger in Bihar. Where the last rites of the late Rajesh will take place. Met the family members of the martyr Rajesh from Chief Minister Hemant Soren. He consoled and said that you people do not consider yourself alone.

Deputy Commandant Rajesh Kumar, who served the country while in BSF, was martyred on Tuesday in a cowardly attack by Naxalites. Rajesh, who hails from Munger district of Bihar, had come to Jharkhand on deputation in 2018 and since then was continuously taking iron against the Naxalites. Ravi, the elder brother of the late Deputy Commandant Rajesh, told that he was the person to lead. Even though he was small in the house, he lived in the lead role. Even when he went to the Border Security Force, he himself went ahead and led the team. Rajesh has three children who are still very young. His wife and father were in a bad condition by crying. The wife is still in shock, she cannot believe that Rajesh is no longer in this world.

Recruitment was done from BSF to Jharkhand Police

Officers from BSF and CRPF are deputed in Jharkhand Police for the purpose of speeding up the Naxal operation. BSF Deputy Commandant Rajesh Kumar was deputed to the state police’s anti-Naxal force STF (Jharkhand Jaguar) on 7 September 2018. In STF, Assault Group 35 was headed by Rajesh Kumar. Rajesh Kumar, originally a resident of Lal Darwaza in Munger district of Bihar, contributed to the BSF on 12 November 2007. His parental corps was the 84th Battalion of Krishnanagar, West Bengal. According to Rajesh’s colleagues, Rajesh Kumar had been a part of many successful operations after contributing to Jaguar in three years.

Jharkhand Crime: In Dumka, a woman and her lover were stripped naked and made a video viral on social media

Elder Line toll free number started for the first time in the country for senior citizens, you will be able to call on 14567 for help

Now the trend of buying gold online has started, jewelers are selling gold even for Rs 100, delivery will also be available at home