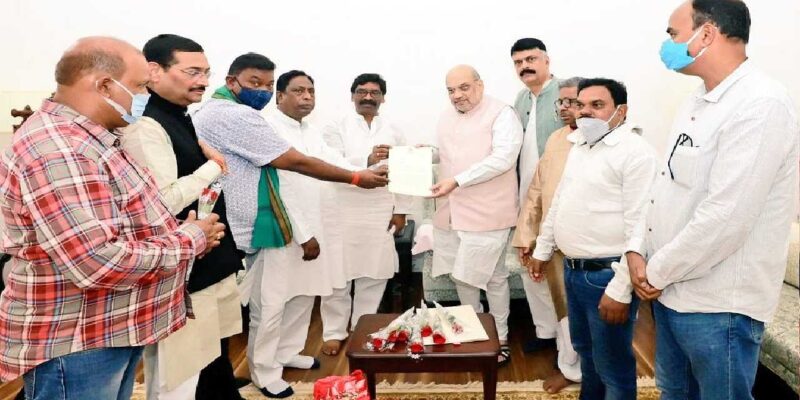 Chief Minister Hemant Soren (Hemant SorenAll party delegation led by (All Parties Delegation) on Sunday in Delhi Home Minister Amit Shah (Amit Shah) with ethnic census and Sarna religion code (Caste census and Sarna religion code) for the demand to be included in the census. The Chief Minister had reached Delhi on Saturday for this meeting. On Sunday morning, Hemant Soren participated in a meeting on the Maoist problem under the leadership of Amit Shah.

Honorable Home Minister in Delhi with the members of the all-party delegation from Jharkhand, Honorable Shri. @AmitShah After meeting Ji, he handed over a demand letter for conducting caste based census.

Caste based census is the need of the hour. pic.twitter.com/Afj8k9wOuv

Congress State President Rajesh Thakur said that the proposal to include a separate column of Sarna Dharma Code in the census has been unanimously passed by the Jharkhand Legislative Assembly and has been sent to the Central Government in the past. Along with this, there should also be a caste census in the country. A memorandum related to this demand will be submitted in the meeting. The Union General Secretary of JMM said that the BJP has agreed in the House on the proposal of Sarna Dharma Code. BJP was expected to attend the all-party meeting. BJP was also represented in the all-party meeting. State BJP President Deepak Prakash was invited by the Chief Minister by sending him a letter and talking. He attended the all-party meeting as per the decision of the party leadership. It is noteworthy that till a day earlier, there was doubt about the representation from the BJP in the all-party meeting.

Jharkhand: ‘More than 2 lakh houses of Ranchi will be connected with free tap water connection’ announced by Hemant Soren government

Laal Singh Chaddha Release Date: Aamir Khan’s fans will have to wait a little longer, the film will be released on this day not on Christmas