Jewar Airport will benefit crores of people of Delhi-NCR, after 7 decades of independence, UP will get its due: PM Modi 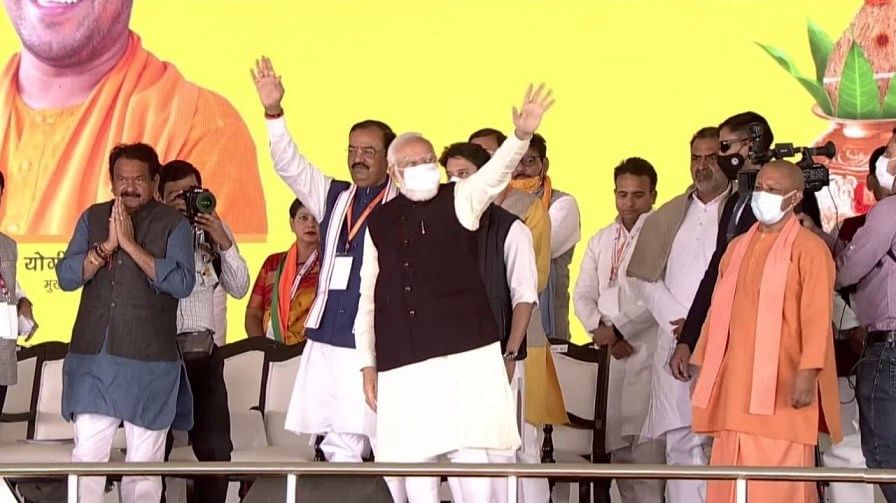 PM Modi during laying the foundation stone of Jewar Airport

Prime Minister Narendra Modi on Thursday laid the foundation stone of Noida International Airport in Jewar, Uttar Pradesh. On this occasion, he said that jewelery has now been marked on the international map and crores of people of Delhi-NCR and western Uttar Pradesh will benefit from this airport. PM Modi said that this airport will also be the biggest center for maintenance and repair of aircraft.

The Prime Minister said that Noida International Airport will also become a great model from the point of view of connectivity. He said, “There will be all kinds of connectivity from taxi to metro and rail to come here. Today, the speed with which the aviation sector is growing in the country, the speed at which Indian companies are buying hundreds of new aircraft, Noida International Airport will also play a big role for them.

The PM said that after independence, Uttar Pradesh was forced to listen to taunts, the earlier governments kept the state in deprivation and darkness. He said, “After 7 decades of independence, for the first time, Uttar Pradesh has started getting what it has always deserved. With the efforts of the government of double engine, today Uttar Pradesh is turning into the most connected region of the country.”

After the construction of this airport, Uttar Pradesh will become the only state in the country where there will be 5 international airports. According to the central government, this will help in reducing the pressure at Indira Gandhi International Airport. It is strategically located and will serve the urban population and neighboring areas including Delhi, Noida, Ghaziabad, Aligarh, Agra, Faridabad.

Airport work will be completed on time: PM Modi

The Prime Minister said that the Noida International Airport will directly connect a huge center of exports to international markets. He said that the farmers here would be able to directly export perishable produce like fruits, vegetables, fish. He said that the work of Jewar Airport remained entangled in the Delhi-Lucknow government. “We are trying to ensure that the airport work is completed on time,” he said.

He said that the earlier government in UP had written a letter to the then central government asking that this project should be closed, but today with the power of the “double engine” government, we have become a witness to the foundation stone laying of the same airport. are.

The project is spread over more than 1,300 hectares.

The central government has said that the first phase of the airport is being developed at a cost of more than Rs 10,050 crore. It is spread over more than 1,300 hectares. After the construction of the first phase, the capacity of the airport will be 12 million passengers annually. The construction work is on schedule and will be completed by 2024.

According to the plan, the airport will have stations for metro and high speed railways. Apart from this, taxi, bus service and private vehicle parking facility will be available. In this way the airport will be able to be directly connected by road, rail and metro and Noida and Delhi will be connected through uninterrupted metro service.

Also read- After all, what happened now that foreign investors withdrew 17000 crore rupees from India in 5 days, what will happen to those who invest money in the stock market

Also read- Parambir Singh Case: Parambir Singh, absconding in the recovery case, reached Mumbai, said – I have not done anything wrong, have full faith in the court