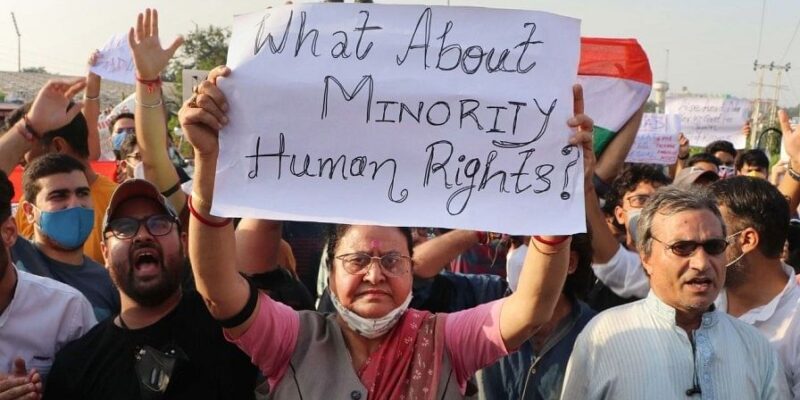 A group of Muslim community on Sunday held a peaceful protest march in the Lal Chowk area of ​​Srinagar against the recent killings of minorities in the Kashmir Valley and Pakistan-backed terrorism. The protesters lodged a protest with posters in their hands, which read – “How long till last”. In the last few days, terrorists have killed at least 7 civilians in Kashmir, including four from the minority community. Principal Supinder Kaur and teacher Deepak Chand were shot dead inside a government school in Srinagar on Thursday.

According to a report by news agency ANI, M Basheer, a Taekwondo coach who took part in the demonstration, said, “You know about the situation here. A school teacher and a principal were killed by terrorists. We have gathered here so that the administration gives justice to his family. Teachers teach us and show us the way. There should be no bloodshed and the idea of ​​brotherhood should be propagated. The Kashmir Valley is for everyone, Kashmiri Sikhs, Kashmiri Pandits and others.”

Another protester, Mohammad Shafi, who reached the protest at Lal Chowk, said, “A large number of Muslims have gathered here. Attempts by terrorists to disturb communal harmony have failed. This performance is showing that there is brotherhood here. We stand for the rights of all Muslims, laborers of Bihar, Kashmiri Sikhs and Kashmiri Pandits. The aim of the terrorists has failed. I want to make it clear that… these killers are not humans, they are demons.”

He continued, “You save a human being. You save humanity. No Kashmiri is unsafe here.” Another protester said, “I request Kashmiri Pandits and Sikhs not to leave here. If they go, the terrorists’ motive will be successful. We need to stand together.”

Terrorists killed 28 civilians so far in 2021

Amid killings of civilians in the Kashmir Valley, former Chief Minister and PDP President Mehbooba Mufti on Friday demanded that accountability be fixed for repeated security lapses. Mufti had told the media, “The situation is deteriorating day by day and the Bharatiya Janata Party (BJP)-led government is responsible for this. The wrong steps taken by the government on and before August 5, 2019 (abrogation of Article 370) are directly responsible for the rapidly deteriorating situation in Kashmir.

Terrorists on Tuesday killed a prominent Kashmiri Pandit Makhan Lal Bindru and a vendor native to Bihar, Virendra Paswan, in Srinagar and Mohammad Shafi Lone, a civilian, in Bandipora. On the other hand, Majid Ahmed Gojri in Srinagar and Mohammad Shafi Dar in Batamaloo were shot dead last Saturday. According to official figures, terrorists have killed 28 civilians so far in 2021. So far this year there have been 97 terrorist attacks in Jammu and Kashmir – 71 on security forces and 26 on civilians.

Also read- New travel rules are being implemented in UK from Monday, know what has been changed for Indian travelers?

10 year old vehicles causing pollution will not be able to run on the roads of Noida, order given to confiscate