Jal Shakti Minister Swatantra Dev Singh picked up a shovel for the “rejuvenation” of Kalyani river, said – pure water is to be delivered from door to door 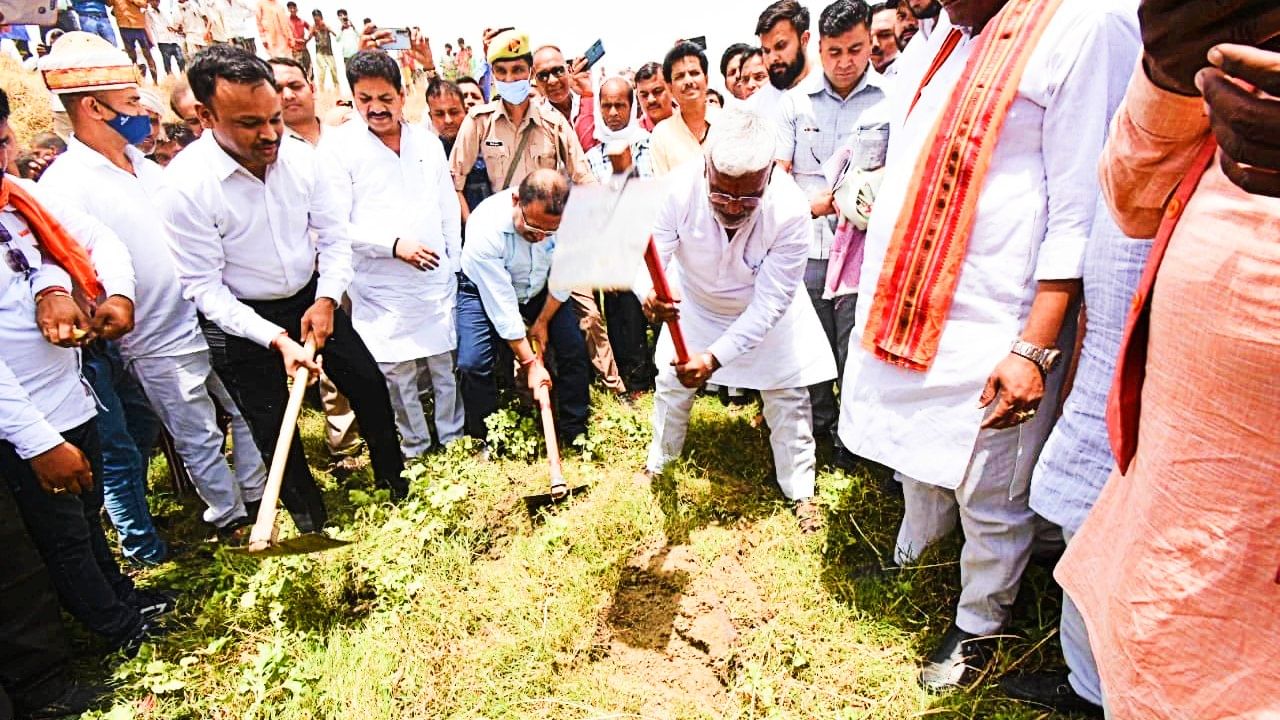 In the UP government, Jal Shakti Minister and BJP State President Swatantra Dev Singh reached Bangarmau today. Where he worshiped the restoration program of Kalyani river.

Uttar Pradesh (Uttar PradeshIn Unnao district, the Minister of Jal Shakti, Government of Uttar Pradesh, renovated the Kalyani river, which is called the life line for the farmers of Hardoi-Unnao, and launched it by running a shovel. During this, DM Unnao and CDO also shoveled together. Where the existence of Kalyani river was ending due to the occupation and encroachment of land mafia. In such a situation, with the efforts of CDO Unnao Divyanshu Patel, the hope of returning the river to existence has awakened among the farmers. During this, the Jal Shakti Minister has spoken of all possible help from the government for the restoration work of Kalyani river.

At the same time, Jal Shakti Minister Swatantra Dev Singh, while referring to fever, said that if a person chews 5 leaves of neem, 2 leaves of basil, black pepper in the morning, the highest fever cannot touch him. At the same time, he told that if there is cleanliness in the village, then the disease can never touch it. During this, CM Yogi Adityanath in the state (CM Yogi Adityanath) and Prime Minister Narendra Modi is leading the country. They are struggling to solve all the problems.

Jal Shakti Minister and BJP State President Swatantra Dev Singh in the UP government.Swatantra Dev Singh) Arrived at Bangarmau today. Where he worshiped the restoration program of Kalyani river. After this, the Jal Shakti Minister along with DM Unnao Ravindra Kumar, CDO Divyanshu Patel and Bangarmau MLA Shrikant Katiyar started the restoration work by running a shovel. In his address from the stage, Jal Shakti Minister Swatantra Dev Singh while attacking the Gandhi family said that he should realize the poverty when he is born in a big family. Nehru is born in the family, such a caste organization is born in the family, he does not know the pain of poverty. A son born in an ordinary family loves the motherland. Loving the motherland, becomes the prime minister of the country. One who understands the needs of the poor.


By 2024, everyone has to provide clean water from door to door

During this, Swatantradev Singh said that clean water has to be given to everyone by 2024 and pure water has to be delivered from door to door. Swatantra Dev Singh while speaking his mind said that earlier there used to be wells, ponds used to live in the village, how was the water safe. Jalshakti Minister said that if there is water, then there is life, water from the house in the house, water from the field in the field, you can do water harvesting. In this way we can save water for our coming generation. At the same time, while talking to the media after the program, the Jalshakti Minister said that with the help of the society, the government plans to renovate all these rivers and build Amrit Sarovar pond. Prime Minister Narendra Modi (PM Narendra ModiIt is desired that water will be stored through Amrit Sarovar. So that the water of the house will be in the house, the water of the farm will be in the field. So that people will be healthy with clean water.