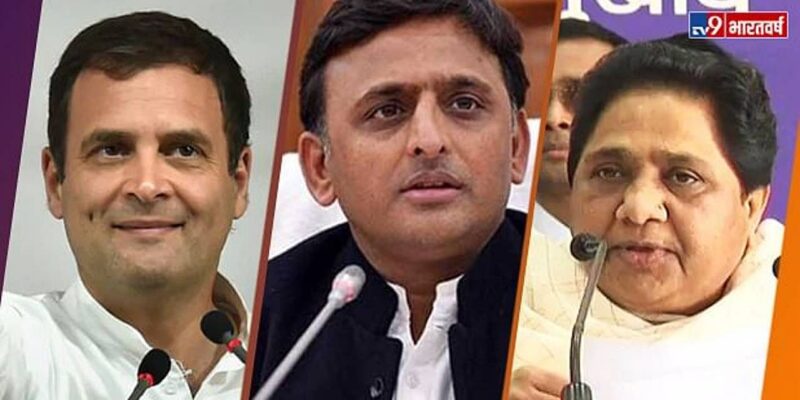 Opposition can make the path of BJP easier in UP

In the upcoming Uttar Pradesh Assembly Election 2022, it seems that the opposition is going to hand over power to the Bharatiya Janata Party once again on a plate. Now only four months are left for the election. The intention of all opposition parties is that they should be in power instead of BJP, but the way preparations are going on, it seems that first they are trying to cut each other’s roots and this time the race is about who. Will emerge as the single largest opposition party.

Shivpal tried for unity many times

Shivpal Yadav formed his own party, but many times he was seen talking about unity in the family, but the matter did not work out. Shivpal always blamed his cousin Professor Ram Gopal Yadav, a longtime Rajya Sabha MP, for this. They believe that Ramgopal keeps instigating Akhilesh against him, due to which the family is not able to gather.

In this battle of uncle and nephew, both will be defeated, but perhaps no one will win. An example of this was shown in the 2019 Lok Sabha elections. Akhilesh Yadav nominated Ram Gopal Yadav’s son Akshay Yadav as Samajwadi Party candidate from Firozabad seat. In anger, Shivpal Yadav decided to contest the election himself with the intention of teaching Ram Gopal Yadav a lesson. Both lost and BJP won the election from Firozabad seat. Since the end of this wrestle does not seem to be in sight at the moment, Shivpal Yadav may once again be seen cutting the vote of the Samajwadi Party. No big bang is expected from his party, but like Firozabad, his party can definitely do the work of indirectly making BJP win.

To some extent even Akhilesh’s fault

If uncle-nephew are seen standing against each other, then to some extent Akhilesh Yadav can be blamed for this. After forming his own party, Shivpal Yadav talked about the unity of the family many times. This time he talked about an alliance between the two parties and kept waiting that Akhilesh would either come to meet him or invite him for talks. Akhilesh only announced that Samajwadi Party will not field its candidate against Shivpal Yadav from Jaswantnagar seat, but only one seat coordination was not acceptable to Shivpal Yadav, so without worrying about what will be the advantage or disadvantage of it, Shivpal Yadav set out to ride the chariot.

Between 2012 and 2017, when Akhilesh Yadav was the chief minister of Uttar Pradesh, it was believed that his family, including his father Mulayam Singh Yadav and his uncle Shivpal Yadav, was not allowing him to work freely. Both the brothers were trying to run the government with a remote control, which Akhilesh did not like. Akhilesh rebelled against his father. With the help of Ram Gopal Yadav, Akhilesh became the national president of the Samajwadi Party. Mulayam Singh Yadav’s health was not going well for the last several years and the Samajwadi Party needed a new president in his place. Shivpalyadav’s eyes were on the post of president, but Ram Gopal Yadav spoiled his game, as a result of which Shivpal Yadav had to form his own party.

This is going to be the first election in which Mulayam Singh Yadav will not be among the people. Akhilesh may not even want Shivpal Yadav to return to the family or the party. This is an opportunity for him to prove that apart from being the son of Mulayam Singh Yadav, he is also a big leader in his own right. And he is probably headed in that direction.

So in this election, regardless of what the outcome would be, Akhilesh Yadav decided to distance himself from both the Congress Party and the Bahujan Samaj Party so that his position could be strengthened. Now all these parties are looking intent on cutting each other’s vote, which is no less than a good sign for BJP.

NCR Draft Regional Plan 2041: Scope of NCR will be reduced, bullet train-heli taxi and waterway; Know how the future of Delhi-NCR will be