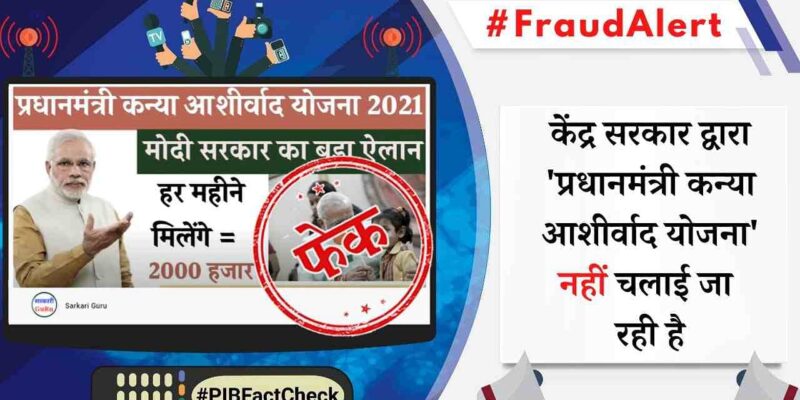 You are probably hearing the name of this scheme for the first time! Maybe you have received a message on WhatsApp, in which it has been told about this scheme! Or have you seen such a video on any YouTube channel! So what is the truth about it? Is there really such a plan?

What is being claimed?

A link to a YouTube video is going viral on social media. It is being claimed in this YouTube video that the central government will give financial assistance of Rs 2000 every month to the daughters. However, the government has clarified about how much truth there is in this claim. This claim has been denied by the government information agency PIB i.e. Press Information Bureau.

There is a fact check wing of PIB i.e. Press Information Bureau – PIB Fact Check. PIB Fact Check has given correct information about this viral message by tweeting from its Twitter handle. It is written by tweeting, it is being claimed by a youtube channel that under ‘Pradhan Mantri Kanya Ashirwad Yojana’, an amount of 2000 rupees will be provided by the central government as financial assistance.

One #youtube It is being claimed by the channel that under the ‘Pradhan Mantri Kanya Ashirwad Yojana’, an amount of ₹ 2000 will be provided by the central government as financial assistance.#PIBFactCheck

No such scheme is being run by the central government. pic.twitter.com/l5KuAX4tYw

PIB has a proper website, where there is a separate page for fact check. It can be visited at this address https://pib.gov.in/factcheck.aspx. Many websites trick people with the intention of fraud and want to extort money. PIB has also put a list of fraudulent websites on this website.

Also read: Why is it so much fun to burst bubble wrap… Why do grown-ups also start acting like children?

Alert for farmers: Rains in these states including Maharashtra for the next 5 days, IMD told- Monsoon is continuing