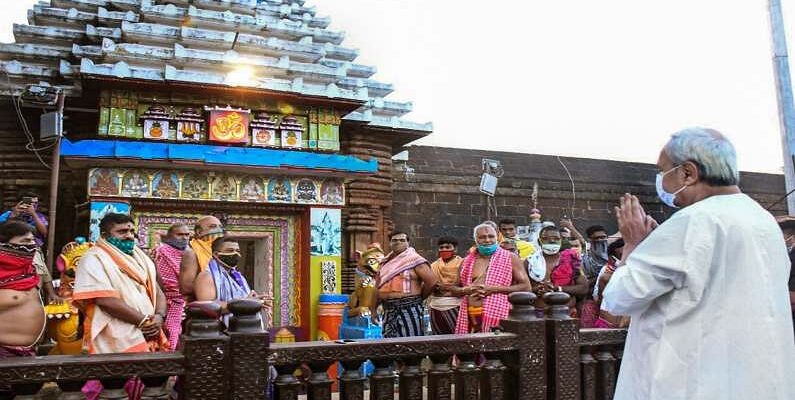 There is a very old saying – now you would repent when the bird ate the field. Does this proverb fit the political situation of BJD i.e. Biju Janata Dal and five-time Chief Minister Naveen Patnaik in Odisha? Is it true that Naveen Patnaik’s BJD has been trapped in such a way that it is now fearing defeat from Saffron Politics by supporting the BJP in Congress Mukt Bharat Abhiyan? Today it has become necessary to find answers to these questions because all the political parties on the land of Odisha are busy in raising their buildings in their own way.

Remember the time when Narendra Modi gave the slogan of ‘Congress-mukt Bharat’ before the 2014 Lok Sabha elections. Then many non-Congress parties, including the BJD of Odisha, did not delay in wholeheartedly hanging the placard of this slogan around their neck, because these people considered the country’s oldest party as their main rival. However, the Naveen Patnaik-led BJD had already joined hands with the BJP to become a part of the NDA to keep the Congress out of power. The BJD-BJP ran a coalition government in Odisha from 2000 to 2009, but it is also true that when Naveen Patnaik realized that such squabbles for power would one day throw the BJD out of power, both of them The political intimacy between the two broke down over the issue of seat-sharing and parted ways. Now that the BJD has uprooted the Congress on the ground, 20 years after joining the non-Congress campaign, it finds itself in a difficult position as the BJP continues to emerge as the main rival. BJD leaders are beginning to realize that making Odisha ‘Congress-mukt’ did not benefit the regional party BJD as much as the BJP got a chance to emerge.

BJD on the path of soft Hindutva

BJP has started getting most of the votes of Adivasi, Dalit, OBC here in the elections, which used to be the vote bank of Congress. The Hindutva policy of the BJP is also very important for its spread in Odisha. But Naveen Patnaik understands this trick of BJP very well. Perhaps this is the effect of Naveen Patnaik, who has always kept a distance from the politics of religion and language, has now started going to the Jagannath temple after the election campaign and victory on the lines of his father Biju Patnaik. Since 2019, Patnaik has started making policies keeping in mind the Odia language and culture, focusing on religious issues, to counter the BJP. There is a lot of whispering in the corridors of power that Naveen Patnaik has taken the path of soft Hindutva in his fifth term.

How much impact will the issue of development leave in the election?

Naveen Patnaik will turn 75 on 16 October 2021. He is the Chief Minister of Odisha since the year 2000. Surely the BJP will raise the issue in the 2024 assembly elections that why is the state so backward on the development map, in which the same person has been the Chief Minister for five consecutive terms and a regional party BJD has a strong government? Why are Koraput, Bolangir, Nuapada, Nabarangpur, Malkangiri, Kalahandi counted among the poorest districts? Now the big question arises here that the person whose political ground is so strong, how much impact will the issue of development leave in the election? There is no doubt that talking about the Modi era in the BJP, the seats and vote percentage in the 2014 and 2019 Assembly and Lok Sabha elections testify that it has become the main rival of the BJD by playing a turtle. Congress has become the number three party here. In the 2014 assembly elections consisting of 147 seats, Biju Janata Dal won 117 seats by securing 43.40 percent votes, while Congress Party won 16 seats with 25.70 percent votes and BJP won 10 seats with 18 percent votes. Talking about the 2019 assembly elections, the vote percentage of BJD has definitely increased to 44.71 percent but the number of seats has come down to 112. Whereas BJP won 23 seats with 32.49 percent votes and Congress became the third party by winning 9 seats with 16.12 percent votes. Talking about 21 seats in the Lok Sabha, BJD, which won 20 seats in the Modi wave of 2014, was reduced to 12 seats, losing 8 seats in 2019. On the other hand, where BJP won one seat in 2014, by winning 8 seats in 2019, it left no stone unturned to show that BJP is going to give a tough challenge to BJD in the coming times. In the recent Pipili assembly by-election, Naveen Patnaik’s party managed to win by just 20,916 votes. BJP got 42 per cent votes here, while BJD got 53.80 per cent votes. Now everyone’s eyes are on the three-tier panchayat and civic elections in the state in 2022. Political pundits clearly believe that Naveen Patnaik’s party will face a tough challenge from the saffron party in all the upcoming elections. Local body elections will also know which direction the wind is going to blow in the 2024 Lok Sabha elections. If we also look at the figures of these elections, the number of Zilla Parishad members of the BJP which was 36 in 2012 increased to 297 in 2017. In such a situation, the question is bound to be that even after being in power for 21 consecutive years, will Naveen Patnaik’s BJD really win elections as easy as before or will they have to bear the brunt of anti-incumbency?

However, experts, who categorically dismiss the question of Naveen Patnaik to bear the brunt of anti-incumbency in the near future, clearly say that even today in Odisha, Naveen Patnaik’s speech is not celebrated with stones, but applause. Despite this, he is the only Chief Minister in the whole country who can neither speak nor read or write Odia, the language of his state. People have won him five times in a row and each time with more votes than before. Journalists who see and understand Naveen Patnaik indiscriminately mention that there is no more soft and less speaking person in politics than Naveen Patnaik. If we turn the last pages of Naveen Patnaik’s life, he did not even look at politics for the first five decades. But when he took the entry, there is no politician of his competition, especially in Odisha. Therefore, the decision of victory and defeat in the politics of Odisha on the issue of development seems difficult.

Secondly, the image of Naveen Patnaik is also considered to be the major reason behind BJD’s victory in Odisha. This is corroborated by Ruben Banerjee, who wrote the biography of Naveen Patnaik, in which he says that once he got a chance to cover the election of Naveen Patnaik from Aska parliamentary constituency in 1998. When he reached Aska, he did not see Naveen Patnaik anywhere. With great difficulty, when he reached the Oberoi Gopalpur Hotel, he saw Naveen Patnaik sitting next to the pool, oblivious to the world of news, smoking a cigarette. After stating the motive, Naveen Patnaik agreed that he would go on election campaign with him but put two conditions together. The first is that he will not tell in his report that Naveen Patnaik is staying in the Oberoi Hotel during the campaign and secondly that he smokes cigarettes. Perhaps he did not want to send a message to his voters that the person seeking votes in India’s most backward area is staying in a five-star hotel. Very few politicians are able to follow such discipline in politics. This is the reason why the people of Odisha do not consider Naveen Patnaik less than a god. This is where the political discipline of the BJP gets defeated. The BJP will have to wait for the day when Naveen Patnaik will announce his retirement from politics to come to power in Odisha, as there is no leader to compete with Naveen Patnaik despite all the favorable political conditions.

18 SP workers booked for attempt to murder in Meerut, 16 sent to jail, accused of assault on police