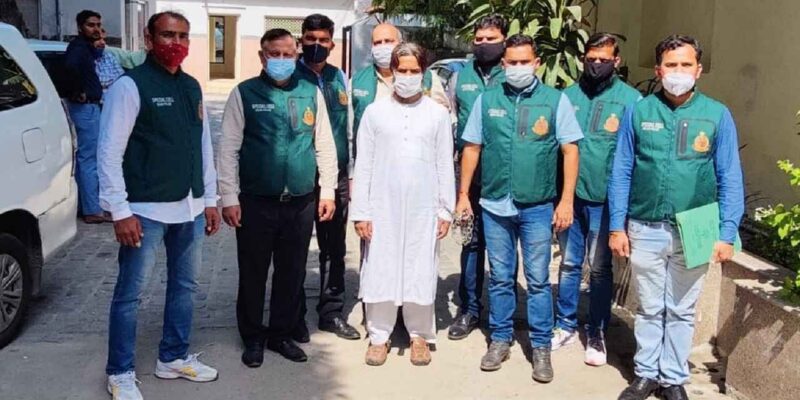 On Monday, 11 October 2021, the terrorist Mohammad Ashraf alias Ali alias Ali Mohammad Noori (46), caught in the capital by the Special Cell of Delhi Police, is making shocking revelations in police custody. Ali Mohammad Noori, who has been under the supervision of Delhi Police Special Cell since his arrest, is a Pakistani terrorist of a very ‘consummate’ type and a well-known ISI trend. This is being guessed from the fact that, he himself is not opening his mouth at all. The teams of the Special Cell engaged in interrogation are sluggishly and thoughtfully asking him the questions. The accused is just trying to waste the time of police remand by giving half-incomplete answers to the same questions.

However, on the other hand, the Delhi Police and the security and intelligence agencies of the country are moving ahead considering this terrorist as a ‘trump card’ in recent times, with trends and hands from the Pakistani intelligence agency ISI. Because these days there are fierce attacks on the general public / minorities in Kashmir. There, the abominable process of openly firing the innocent with bullets has started again. Along with this, the fact has been proved that the arrested Pakistani terrorist Mohammad Ashraf alias Ali Mohammad Noori alias Ali has also been related to Kashmir Valley.

Everyone is on target from Delhi to Kashmir

The accused himself has confessed that he used to roam around the country. Nowhere did he stay in one place for a long time. So that it is not caught by the eyes of Indian agencies. ISI Trend in India In a hidden period of 15 years, this mastermind has himself admitted that he has visited the Jammu and Kashmir Valley more than 30 times. There he has seen many Indian soldiers being kidnapped and slaughtered at the behest of the ISE in front of his eyes. So far, the attitude of this hardcore terrorist is exactly the same as that of an experienced trained terrorist.

The officers/teams of Delhi Police and the country’s intelligence agencies may be raising questions. But this very insolent type of Pakistani terrorist keeps silence by answering one or two of those questions. Indian agencies know how to get the inside talk out of such people. So they are slowly starting to spew things out. On Monday night (from his arrest in Delhi) till now, Ali Noori has sprung up. That too is no less for Indian agencies. The biggest thing is that the accused has raised a lot about the incidents being carried out by the Pakistani intelligence agency ISI through him (through Noori) in the Jammu and Kashmir Valley.

ISI trend terrorist is not deterring from tricking

Now the Indian agencies are just trying to decide that what is the truth in what the accused has confessed. Because it is not even possible to quickly believe the statements of such fundamentalist and trend terrorists by ISI. They have the ability to tell lies to any extent to mislead Indian agencies. The arrest of mastermind type terrorist Noori is a good thing. But it would be even better when the Indian investigation, security and intelligence agencies can get information of their meaning from the accused. And this is the work that is very complicated.

It is noteworthy that on Monday night, Noori was caught alive by the teams of Assistant Commissioner of Police (ACP) Lalit Mohan Negi and ACP Hriday Bhushan, constituted under the leadership of DCP Pramod Singh Kushwaha of Delhi Police Cell. However, when the police reached the base of the accused to raid, they reached with the entire corpse that, a bloody face-to-face encounter was also possible. It is a different matter that Nuri himself raised his hands in front of the armed Special Cell personnel.

Weapons put in the hope of life

The accused surrendered in front of the police without any hesitation. After that he also confiscated a consignment of weapons from Kalindi Kunj Ghat in South-East Delhi district. A few days ago, a WhatsApp message came to Noori to take possession of this consignment of weapons in Delhi. That message was sent from Pakistan by an ISI handler named Nasir. This consignment of AK-47, hand grenade, pistol, many magazines and a large number of cartridges was buried under a tree by digging a pit in the ground.

Who and when has suppressed this cache of confiscated weapons under Kalindi Kunj Ghat? This is currently not known to anyone except the Delhi Police Special Cell and the accused terrorist. Nasir, the handler of the ISI present in Pakistan, had entrusted Ali Mohammad Noori alias Mohammad Ashraf to carry out terrorist attacks around festivals. The Pakistani handler had also arranged for the recovered arms and ammunition.

All the questions born after the arrest

From where but how were these weapons transported to Delhi’s Kalindi Kunj Ghat? Who delivered? Indian agencies are sweating in getting answers to all these questions. If the claims of intelligence agencies have merit, then according to that, the arrested terrorist Noori has so far sent many Indian youths to Pakistan by instigating them in the name of religion. Their number is said to be in the hundreds. Most of these youth are 8th or 10th Jamaat pass. Or many are illiterate.

Whom the accused took under his control in the name of religion. Along with this, those Indian youths handed over to Pakistani intelligence agency have also been lured to become rich overnight. These youths have been told that even if they are killed during ISI training, their names will be recorded in the list of ‘martyrs’. Recently, the ISI had given the task of causing havoc in the country’s capital Delhi and some other important congested places.

This is how ‘lone wolf attack’ happens

Especially on the occasion of festivals like Diwali. When the markets are overcrowded. So that more and more innocents can be killed in such crowded places. According to a top officer of the Delhi Police Special Cell, who was interrogating Noori, “This time on the occasion of festivals, terrorist Mohammad Ashraf alias Ali alias Noori had to cause destruction alone and himself as part of the conspiracy. In which he failed. The way the plan or blueprint of attack in Delhi was prepared by ISI for Nuri that he alone will kill the innocent this time. This is what is actually called ‘lone wolf attack’ in the language of terrorism, that is, attacking a mob by ‘targeting’ a single terrorist.

–NewsNCR EXCLUSIVE: In India, the Taliban government is trying to get it done on its own.

–Inside Story: Red Fort attacker or ISI trend terrorist Ali, why do they all marry Indian girls?

Good news for devotees, railways will run premium trains on Ramayana, Northeast, Char Dham circuit, this will be the fare

Mahindra XUV700 set a new record, set a speed of more than 4 thousand km at the speed of 24 hours