Indian heroes of the First World War, tales of bravery 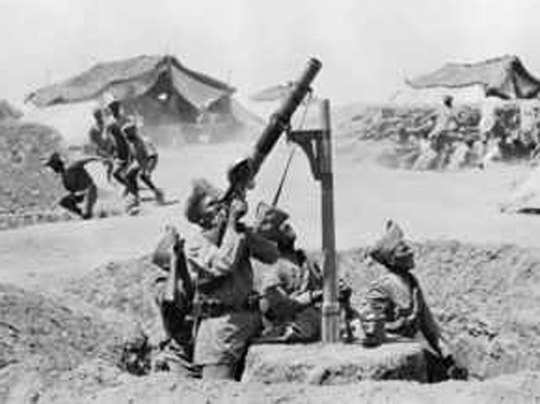 Thousands of soldiers from undivided India took part in the First World War that started in 1914. The war, which began on July 28, 1914, ended on November 11, 1918. The role of Indian soldiers in this war is remembered with respect all over the world. Bravery stories of some Indian soldiers who were awarded the Victoria Cross.

Gabbar Singh Negi was born on April 21, 1895 in Chamba, Uttarakhand. In 1913, he was admitted to the Garhwal Rifles. At the same time the First World War broke out in which the soldiers of the Garhwal Rifles were sent to France.

The regiment to which he belonged took part in the Battle of New Chapelle in March 1915. At that time his age was only 21 years. On March 10, 1915, his unit attacked a position of German troops. Gabbar Singh Negi entered the main moat with his contingent. He forced the enemy to surrender. In the end he also died. He was awarded the Victoria Cross for his extraordinary act of bravery. Gabbar Singh Negi fair is held every year in Chamba in his memory during which tributes are paid to him at his memorial.

Badlu Singh was born in Dhakala, Punjab. He was a Hindu Jat. He was a Risaldar in the 29th Lancers Regiment of the Indian Army. During World War I, he was first sent to France but later to Palestine. He was posthumously awarded the Victoria Cross.

The bravery and sacrifice he displayed on the banks of the Jordan River in Palestine on September 23, 1918, is unmatched. It was morning. His squadron attacked an enemy strongpoint on the west bank of the Jordan River. On reaching near the position, Risaldar Badul Singh saw that there was a small hill on the left. There were 200 enemy soldiers and machine guns on it. From there his squadron came under heavy fire, causing heavy casualties to his comrades. Without hesitation, he took his six other comrades and proceeded to capture the hill. He captured the hill and saved a large number of his soldiers from dying. He was badly wounded in this attack but before he died all the machine guns and infantrymen of the enemy surrendered.

Chatta Singh was born in 1886 in Kanpur, Uttar Pradesh. He was a soldier in the Bhopal Infantry of the Indian Army. The Battle of Wadi took place on January 13, 1916 in Mesopotamia (present-day Iraq). In that war, he showed unmatched bravery for which he was awarded the Victoria Cross.
His commanding officer was badly wounded during the battle. He was lying helpless in the open field. Heavy firing was going on. In the meanwhile it was difficult to save his life but Chatta Singh decided not to leave the commanding officer just like that. Amidst the firing, he began digging a trench for the officer. He stayed with the wounded officer for five hours until nightfall. He threw his body forward to save the Commanding Officer. When it was dark, he brought the officer to a safe place. He passed away in 1961.

He was born on March 4, 1883 in Karbartir village of Garhwal. He was a Naik in the Garhwal Rifles. On November 23–24, 1914, his regiment tried to recapture the British minefields near Festubert from the enemy. He was awarded the Victoria Cross for his role during this war.
It was the night of November 23-24, 1914. Negi’s regiment went on to liberate the British trenches from German troops. Bullets were being fired from the enemy side. The bullets hit his head and arms twice. Amidst heavy firing and shelling, Darwan Singh Negi charged forward and forced the German soldiers to flee from the trench. He later retired from the army with the rank of Subedar. He passed away in 1950. The Regimental Museum of the Garhwal Rifles in Lansdowne, Uttarakhand, is named in his honour.

Govind Singh was born on December 7, 1887 in Damoi village of Rajasthan. He was in the cavalry of the 2nd Lancers during the First World War. He was awarded the Victoria Cross for his gallantry at the Battle of Cambrai on 1 December 1917.
During the battle, his regiment gets surrounded by the enemy. It was necessary to send a message to brigade headquarters to tell the position of the regiment. It was a difficult task to convey the message amidst heavy firing. In this situation, Govind Singh took up this responsibility. Every time his horse would be targeted by the enemy, but every time he would go on foot and leave the message. Govind Singh survived the war, who died in 1942.