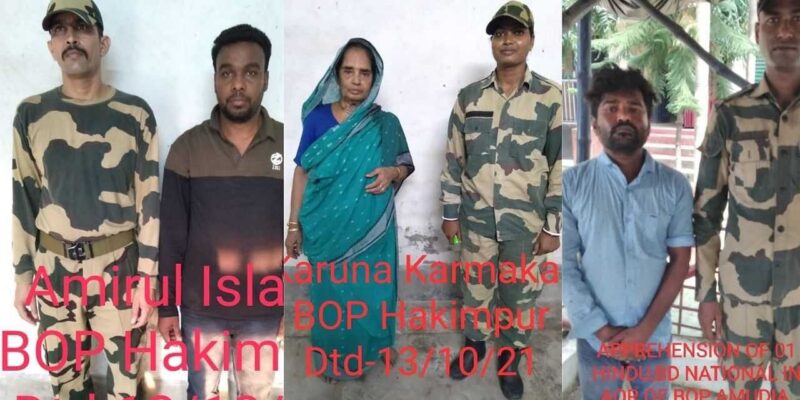 Border Security Force (BSF10 illegal infiltrators (Infiltrators) is captured. Based on the information received from the intelligence department, the BSF has made this arrest. They were trying to illegally infiltrate India with the help of Bangladeshi touts. On interrogation, the arrested persons were identified as Manjul Mulla, Karuna Karmakar, Kamarul Laskar, Amirul Islam, Tusar Sarkar, Mo Abdul Hanan, Mo Kasoor, Mo Ramzan, Mo Zahid and Asma.
As a Bibi. Most of them are Bangladeshi citizens.

A statement issued by the BSF said that the border outposts of 153rd Battalion were in the area of ​​Panitar and Ghojhadanga after the intelligence department confirmed that illegal infiltration could take place in this area. On the basis of the news, on the night of 13 October 2021, the soldiers kept their eyes on the roundabout near the international border. As a result the movement of some suspicious persons was observed. When the soldiers challenged them, they tried to run back, but the agile and alert soldiers caught 4 Bangladeshi citizens among them. After that, the rest of the infiltrators were arrested from other areas respectively.

During initial interrogation, everyone told that they are Bangladeshi citizens and were trying to come to India in search of employment. He told that he had given Taka 15,000/- per person to a Bangladeshi broker for crossing the international border, but the BSF caught him near the international border. The arrested Bangladeshi nationals have been handed over to Basirhat Police Station for further legal action. The Public Relations Officer of the South Bengal Frontier said that the Border Security Force is taking strict measures to prevent cross-border movement on the Indo-Bangladesh border. Along with this, people involved in cross-border crimes and their accomplices are also being nabbed by conducting siege operations in the border areas by sharing the information with other agencies. We will not allow infiltration from our areas under any circumstances.

BSF jawan dies due to drowning in Ganga river

Under the South Frontier, Shailendra Dubey, a brave soldier of the Border Security Force, was going along with his 02 companions to do duty in the border outpost of the 78th Corps, Chap Ghati. When the boat arrived in the middle of the Ganges river, suddenly the flow of the river started carrying the boat away, when Shailendra Dubey’s balance got disturbed and he could not keep it up and fell into the strong current of the Ganges river with weapons. His companions tried their best to save him but due to the flow, he got trapped in the womb of the river. In a search operation that lasted for about 23 hours, the body was found near the Nurpur border post. The martyr jawan was a resident of Naubasta village in Kanpur district of Uttar Pradesh, leaving behind his wife and 02 innocent children.

There was a ruckus in Bengal on increasing the jurisdiction of BSF, Shubhendu officer defended, said- ‘Intruders, drug and cow smuggling will be stopped’

Was getting upset in the middle order, as soon as he became an opener, scored 11 centuries in 1 year, made a new shot, scared the bowlers a lot.

Maharashtra: Nawab Malik attacked NCB, said- these people are unable to differentiate between tobacco and ganja