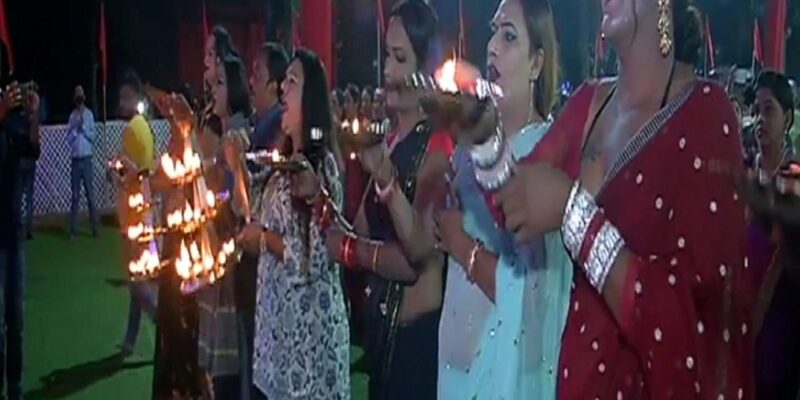 On the occasion of Navami, eunuchs performed Maha Aarti at Durga Pandal in Jabalpur, Madhya Pradesh today. During this, there was a huge crowd of devotees in the pandal.

On the occasion of Navami, today eunuchs performed Maha Aarti in Durga Pandal in Jabalpur, Madhya Pradesh. During this, there was a huge crowd of devotees in the pandal. Thousands of devotees thronged the pandal (Jabalpur Durga pandal) to seek the blessings of the eunuchs along with the goddess. The eunuchs today performed Maha Aarti at the pandal of Mother Jagat Janani in the Civil Lines area and sought a vow from the mother to free the society from Corona. On the occasion of Navami, a special aarti was organized by the Kinnar Samaj.

Many eunuchs of Jabalpur reached the pandal of Maa Durga and participated in the grand aarti. Let us tell you that the idol was established by Bal Durga Samiti in Civil Lines. Today, when the Kinnar Samaj reached the pandal to perform Mahaarti, thousands of devotees thronged to seek his blessings. Actually, according to the scriptures, eunuchs are considered to be the form of Ardhanarishwar.

It is believed that the blessings of eunuchs give a lot of progress and happiness and prosperity. Due to being considered as Ardhanarishwar, the Kinnar Samaj had reached the pandal for Durga Aarti today. During the Maha Aarti, the Kinnar Samaj said that for two years the whole country is battling the corona epidemic. Last year also due to Corona, Durga Utsav could not be celebrated with pomp. People had to suffer a lot due to this epidemic. That is why he wishes Maa Durga to get rid of the epidemic soon. Along with this, he wished for happiness, peace and prosperity everywhere.

Let us tell that today the festival of Navami was celebrated with great pomp across the country. People arrived in large numbers in Durga pandals for darshan and aarti. During this, eunuchs performed Maha Aarti in a pandal of Dabalpur. During this, thousands of devotees reached and took his blessings. He prayed to Durga Maa for the liberation of the society from Corona.

Also read- MP: Sadhvi Pragya furious over CM Baghel’s remarks about Naxalite, said – country and Hindus are safe only because of RSS

KRK targeted the factionalism of Bollywood stars on Aryan Khan case, praised Kangana for this