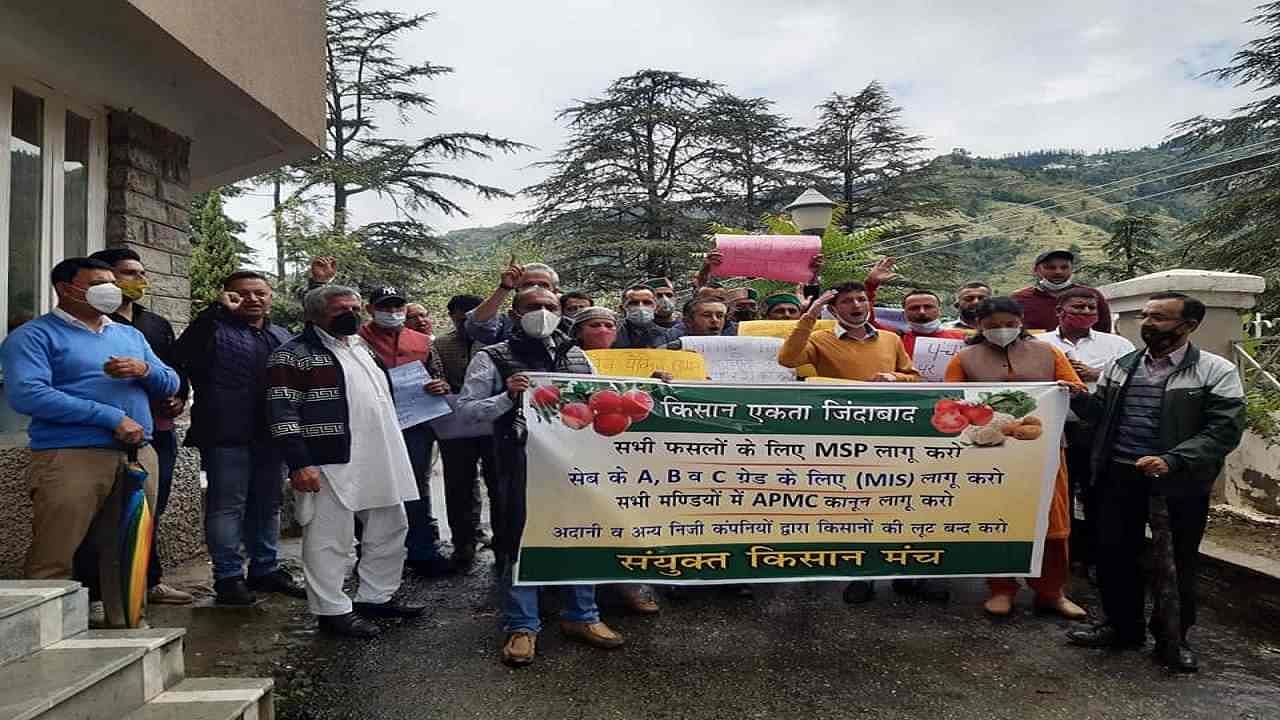 The farmers allege that the influence of middlemen is increasing in the mandis, due to which they are not getting the right price for their produce.

The farmers of Himachal Pradesh are worried about not getting the right price of apples. The fall in prices is not taking its name to stop. Seeing no relief, the farmers have opened a front against the government. On Monday 13 September, farmers staged a statewide protest. Under the leadership of Himachal Kisan Sabha, 25 farmer organizations gave their support to this demonstration.

Farmer organizations demonstrated at mandis, district headquarters and block level. The farmers allege that the influence of middlemen is increasing in the mandis, due to which they are not getting the right price for their produce. The Himachal Pradesh Agricultural and Horticultural Produce Marketing (Development and Regulation) Act (APMC), which was enacted in the year 2005, which entitles the farmers, has not been implemented till date. In such a situation, the farmers are now in the mood for a cross fight.

Demand to buy apples at MSP

Apple is the most important crop of Himachal Pradesh. According to a report, about 44 lakh families of the state are associated with apple cultivation and its business. Its crop is about 49 percent of the total area of ​​the state, which is about 85 percent of the total fruit production. Kuldeep Singh, president of the Kisan Sabha and a member of the forum, told that he has given 10 days to the government, if the problem is not resolved, the protests will intensify. He said that farmers are upset with the falling prices of apples. In such a situation, the government should also purchase horticulture crops on the lines of Kerala at the Minimum Support Price (MSP).

These are the 13 point demands of the farmers

1. The government should fix the Minimum Support Price (MSP) for all crops and it should be implemented legally.
2. In Himachal Pradesh also, the market mediation scheme (MIS) should be fully implemented on the lines of Kashmir and under the market mediation scheme (MIS) for apples, the price of A, B and C grade apples is Rs 60, Rs 44 and Rs. 24 per kg should be purchased at support price.
3. APMC law should be strictly implemented in the marketing markets of the state.
4. The payment of the outstanding money with the arhtiyas and buyers of the farmers should be made immediately. According to the provisions of the APMC Act in the mandis, farmers should be ensured their payment on the same day their produce is sold.
5. According to the conditions at the time of its manufacture in the cold stores of Adani and other companies, the provision of keeping 25 percent apples to the gardeners should be strictly implemented immediately.
6. Farmers cooperative societies should be given 90 percent grant for setting up cold stores at the local level.
7. The increase in the prices of cartons and trays used in the packaging of apples and other fruits, flowers and vegetables should be withdrawn.
8. The government should compensate for the loss caused to the farmers and gardeners.
9. Rising inflation should be stopped and the increase in freight should be withdrawn.
10. Apple and all other crops should be sold by weight in all the mandis of the state.
11. The apples taken by HPMC and Himfed in the last years should be paid immediately.
12. The subsidy being given on fertilizers, seeds, insecticides, fungicides and other cost items should be reinstated and the government should provide appropriate quality cost items to the farmers at affordable rates through the Department of Agriculture and Horticulture.
13. The outstanding subsidy of sprayers, tillers, anti-hail nets, etc., used for agriculture and horticulture, should be provided immediately.

Also read: A gift for the farmers of Bundelkhand, a barrage will be built with Rs 3000 crore, relief from drought

Also read: Tribal children of Madhya Pradesh are growing tomatoes from brinjal plant, do you know how this happens

There is no military interference in the civil work in Sri Lanka, the government responded to the allegations of UNHRC

At the age of 101, this woman does risky work, yet does not want to retire