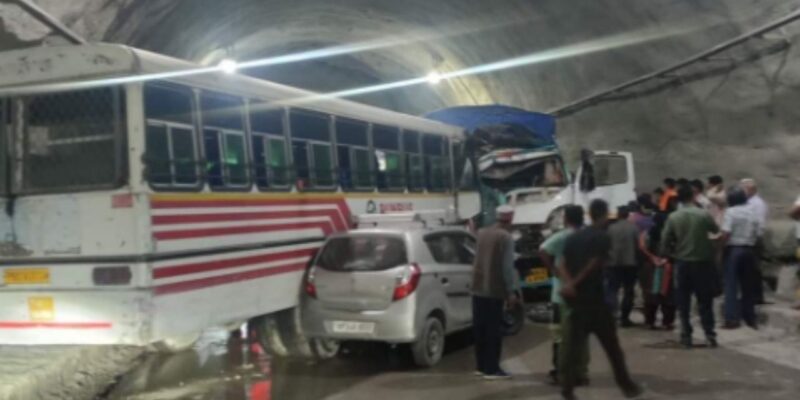 Bus and truck collided inside a tunnel in Mandi

A terrible accident has happened in Mandi district of Himachal Pradesh. According to the information, there was a terrible collision between a Punjab Roadways bus and a truck in Mandi district on Thursday. This collision happened inside the tunnel. One person has died in this accident, while 14 others have been reported injured. The police have shared this information related to the incident.

Mandi Superintendent of Police Shalini Agnihotri said that the bus was going to Manali and the truck was coming from Manali. During this, both the vehicles collided inside the tunnel. He further told that in this accident one person died on the spot while 14 others were injured.

The injured were taken to the hospital

Shalini Agnihotri said that those who were injured in the accident were immediately taken to the nearest hospital, where they are undergoing treatment. He said that the police has registered an FIR regarding the incident and has started investigation into the matter.

Himachal Pradesh | One person died, 14 injured in a collision between a bus and a truck inside the Aut tunnel in Mandi district today: Shalini Agnihotri, SP Mandi District pic.twitter.com/ShGT2sZCDV

According to the information, this accident happened on the Chandigarh-Manali National Highway at 8 pm on Thursday night. According to media reports, the driver of the truck has died in this accident. Other people have got injuries. Many of the injured have also been referred to Kulli Hospital. This accident took place inside the tunnel, so there was a long jam after the incident. Which was opened after hard work.

read this also: Crisis arose on the trust of religious leader Dalai Lama! Did not get any money help from abroad for last 6 months

read this also: BJP expelled Chetan Bragta from the party for not withdrawing the nomination, is an independent from Jubbal Kotkhai seat.

The miscreant, who escaped by dodging the police during the medical checkup in the hospital, was caught from Dewas station after a few hours.