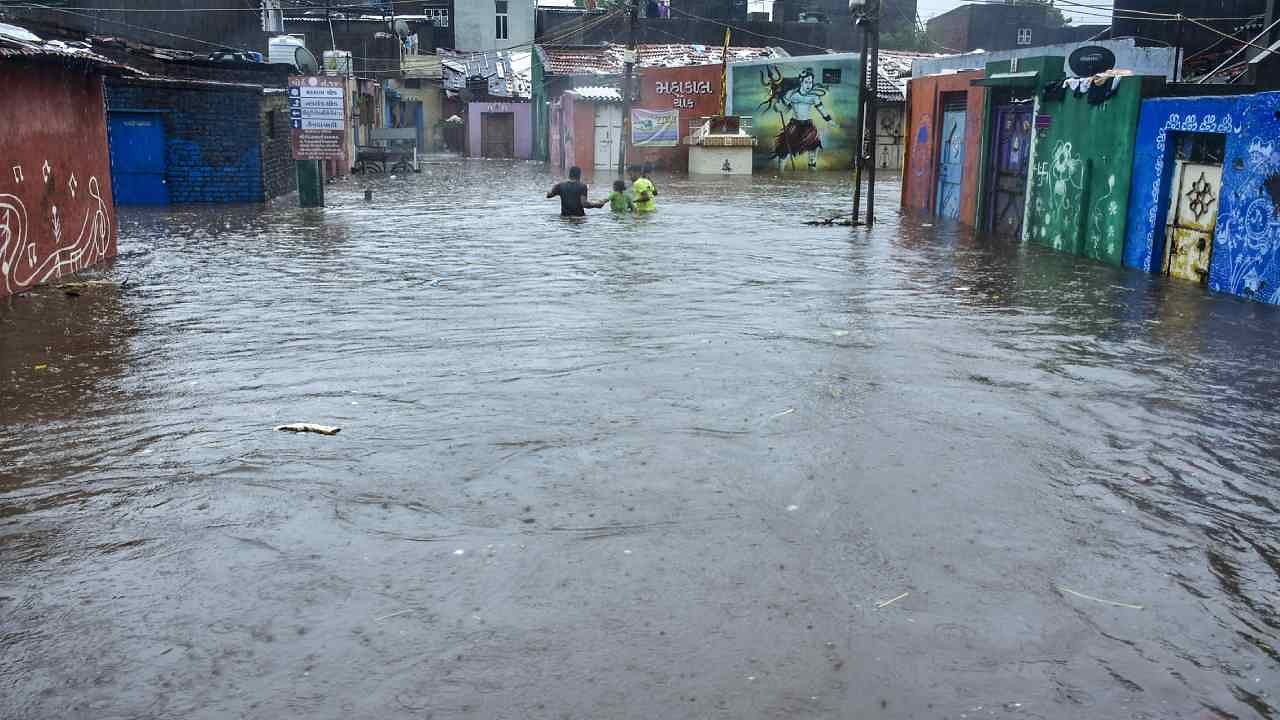 A bridge over the Phofal river collapsed, blocking the road connecting Jam Kandorna and Gondal in Rajkot district, officials said.

Rajkot and Jamnagar districts of Gujarat received heavy rains during the last 24 hours and more than 200 people trapped in the floods were rescued while more than 7,000 people were shifted to safer places in both the districts. The officers provided this information. Besides a national highway in Jamnagar, 18 state highways passing through Rajkot, Jamnagar and Junagadh districts of Saurashtra region were closed due to floods, affecting traffic, he said. He said that after heavy rains the connectivity of many villages has been cut off from the roads.

A bridge over the Phofal river collapsed, blocking the road connecting Jam Kandorna and Gondal in Rajkot district, officials said. After overnight rains in Rajkot and Jamnagar, the rain in both the districts reduced slightly on Tuesday, while the neighboring Junagadh district received heavy rain during the day.

Chief Minister’s Office (CMO) officials said that Chief Minister Bhupendra Patel will visit Rajkot and Jamnagar districts to take stock of the situation. Indian Air Force (IAF), to assist in the relief and rescue operations being carried out by teams of National Disaster Response Force (NDRF) and State Disaster Response Force (SDRF) in the two districts badly hit by heavy rains, according to officials. The Navy and Coast Guard were called in.

Rajkot’s Lodhika taluka received the highest rainfall of 516 mm (mm) in the state during the 24-hour period ending at 6 am on Tuesday, the State Emergency Operation Center (SEOC) said in a fresh bulletin. The SEOC said that Visavadar taluka of Junagadh district of Saurashtra received 468 mm of rain, while Kalavad in Jamnagar received 406 mm, Rajkot taluka 325 mm and Dhoraji in Rajkot received 250 mm of rain.

People were rescued by Airforce helicopter

Jamnagar District Magistrate Saurabh Pardhi said teams of the Navy and Coast Guard also helped the Jamnagar administration to rescue 150 to 160 people in the city as local rescue teams could not reach there due to the rise in water level. Gujarat has received only 69.24 percent of the normal rainfall during the monsoon season.

Also read- Shivraj Singh Chauhan got angry with the scam in PM Awas Yojana, suspended two officers from the stage itself

Also read- Corona in Gujarat: Gujarat government’s important decision in the battle of Corona, night curfew will be imposed in 8 cities till September 25

A unique sight was seen in the ongoing session of Meghalaya Assembly, for the first time, the national anthem was played using Khasi-Garo instrument.