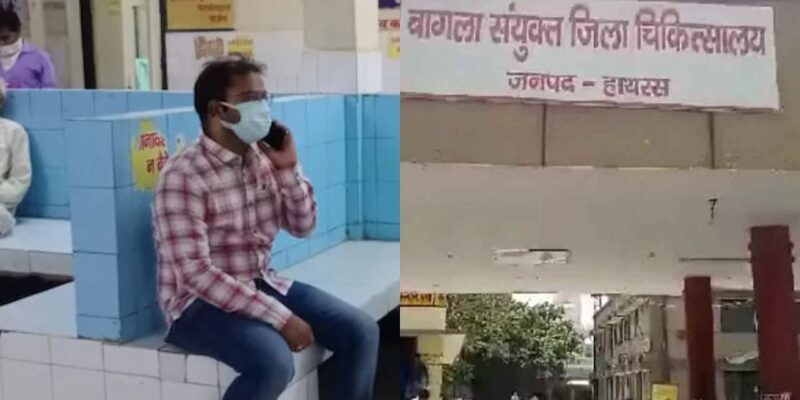 The DM of Hathras suddenly reached the district hospital for inspection today. There was not a single doctor present in the hospital at that time.

These days the outbreak of Dengue and Viral is spreading rapidly in UP. In Hathras too, a large number of sick people have gathered in the hospital. Today, the DM of Hathras suddenly reached the district hospital for inspection. No one was aware of his reaching the hospital. Like a normal patient, he reached the hospital by bike at 7.40 am with his two stenos. During this, he got a form made in the name of Ramesh by paying 1 rupee.

Not a single doctor was present in the hospital (Hathras District Hospital) till 8 in the morning. The patients were visible everywhere in the hospital. The DM had reached there to know the reality of health services in the hospital. Even when the doctors did not reach the hospital till 8 pm, the DM issued instructions for action against them. Along with this, he also sought an answer from CMS regarding this.

Strict action on absence of doctors

These days the outbreak of viral fever and dengue is spreading rapidly in Hathras district. At the same time, the government’s communicable disease campaign has also started. But the doctors did not reach the hospital on time. There was a huge crowd of patients in the hospital. There were lines in the OPD. But the doctor himself did not even know. Waiting for the DM doctor, wearing a mask sat on a bench. During this he also inspected the wards. After reaching the children’s ward, it was found that there are no doctors there. At the same time, the emergency ward was also inspected. The DM was present in the hospital for about 45 minutes.

DM arrived on surprise inspection of the hospital

The condition of the women’s ward was also not very good. Even there, most of the doctors and staff were not present in the morning. The DM also inspected the toilets of the government hospital. Seeing the mess there, he called for an answer from the CMS of the emergency of the district hospital. Along with this, after reaching his office, he issued instructions for strict action in all cases of negligence. Instructions have also been given to issue notices against absent doctors and staff in the hospital.

Also read: ‘Final Ardas’ for farmers killed in Lakhimpur Kheri violence on Tuesday, farmer leaders will gather near the spot

Also read-UP: In the desire to earn money, the student reached the school for investigation by becoming a fake IPS, was caught like this by the understanding of the teacher