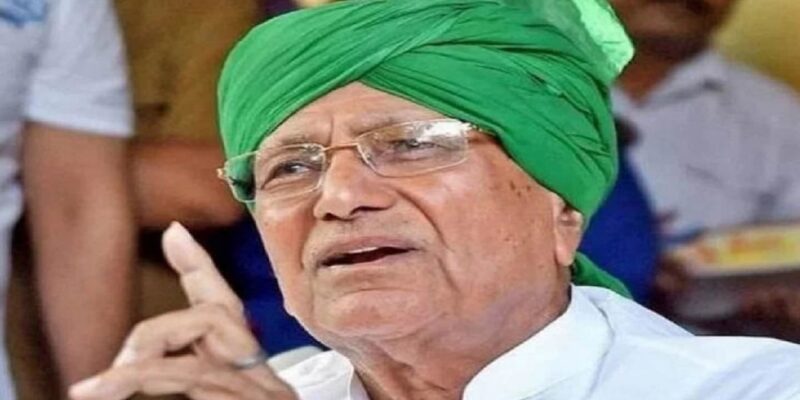 In the program organized on the birth anniversary of Chaudhary Devi Lal, former CM Omprakash Chautala said that INLD will soon return to power. At the same time, after being released from jail, he is constantly engaged in uniting the Third Front.

Former Haryana Chief Minister and Indian National Lok Dal (INLD) supremo Om Prakash Chautala on Saturday stressed the need for a Third Front to protect the interests of the country. Reprimanding the central government, he said that today is the birth anniversary of my father Chaudhary Devi Lal ji. On this day I want to remind everyone that our country is mainly run by the farmers of the country. If the farmers of a country are happy, then it is the richest asset for the country. Such is not the case as of now. Till now the central government is busy looting the money of the general public.

Many farmers are protesting against the Center over the agricultural laws made in September 2020. In January, the Supreme Court had stayed the implementation of these laws. Chautala further said that for the ongoing protest of the farmers and to protect the interests of the country, I urge all the political parties of the Third Front to come together and speak about the bad conduct being done by the central government. He said that if Bihar CM Nitish Kumar wants to be involved, then he can do so.

After being released from Tihar Jail in July after serving a 10-year sentence for his involvement in the teacher recruitment scam, Chautala has been busy mobilizing support for the Third Front. After his release, Chautala claimed that Bihar CM Nitish Kumar, who is leading a coalition government with the BJP in Bihar, had agreed to attend a rally led by the Third Front.

Chautala said his party would soon return to power in Haryana and fulfill its promise of providing jobs to all the youth as per their qualifications. INLD on Saturday organized an honor day function in Jind, Haryana to commemorate the 108th birth anniversary of Chaudhary Devi Lal. Former Punjab CM Parkash Singh Badal, former Jammu and Kashmir CM Farooq Abdullah were present in the public meeting.

Will return to power soon

Apart from the opposition leaders, JDU leader KC Tyagi and senior BJP leader Birender Singh were also present in the rally. After coming out of jail after serving 10 years in the job recruitment scam, Chautala while addressing a public rally said that INLD is getting stronger. If we keep following the thoughts of Devi Lala, we will soon return to power in Haryana.

A gift to Haryana on the 105th birth anniversary of Deendayal Upadhyay, CM Khattar launches Samarpan Portal for volunteers

Big plan of farmers during Bharat Bandh, national and state highways will jam for 10 hours, ambulance and emergency services will get exemption