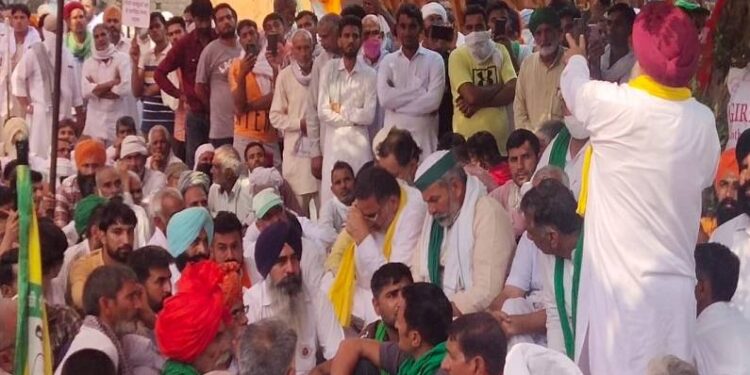 Home Minister Anil Vij said about the demand for the release of farmers, ‘It is up to the courts to release them. How can we do this?

A large number of farmers, led by Bharatiya Kisan Union (BKU) leader Rakesh Tikait, continued to protest outside the Sadar police station in Fatehabad, Haryana on Sunday, demanding the release of two farmers. During this, the protesters demanded the withdrawal of the criminal case against the arrested farmers.

An FIR was lodged against a group of farmers after farmers tried to gherao the residence of Jannayak Janata Party (JJP) MLA Devendra Singh Babli here on Wednesday night. The police have arrested Vikas Sisar and Ravi Azad in connection with the incident. Both of them have been booked under various sections of the Indian Penal Code and the Disaster Management Act, 2005. The counsel for the accused said that Sisar and Azad have filed bail applications in the local court, which will be heard on Monday.

Addressing people outside the police station on Sunday, Tikait said that till the fellow farmers are not released, the protesting farmers will not move from here. The protesting farmers had earlier also demanded registration of a case against Babli for abusing her. Babli later expressed regret for using ‘inappropriate’ words against the farmers.

Tikait along with some other farmer leaders had gathered at the grain market here on Saturday night and then marched towards the police station. Speaking to the media outside the Sadar police station on Saturday, senior leader of United Kisan Morcha Yogendra Yadav said that the issue of release of two farmers has not been resolved yet. The United Kisan Morcha is leading the farmers’ movement.

He had said, ‘There is a deadlock in the talks between us and the police administration.’ Yadav said that Babli had not filed any complaint against Vikas and Ravi Azad, who have been arrested by the police. But the government is not ready to withdraw the case against him, he said. On Sunday, in the presence of Tikait, a group of women sang songs highlighting the plight of farmers.

He took a dig at the Center and the Haryana government on the issue of farmers and took on Deputy Chief Minister and JJP leader Dushyant Chautala for not standing with the farmers. Tikait said his agitation against agricultural laws would continue till the government repeals agricultural laws and enacts a law on Minimum Support Price (MSP).

On June 1, Babli faced opposition from a group of farmers, who showed him black flags and raised slogans. Babli had alleged that some protesters misbehaved and broke the glass of his car.

However, the farmers accused Babli of using abusive and threatening language in public. The protesting farmers had said on Wednesday that they would gherao all police stations across the state on June 7 if MLA Babli did not apologize by June 6. Several farmer groups in the state have been opposing the public programs of BJP-JJP leaders.

When journalists in Ambala asked Home Minister Anil Vij about farmers’ demand for the release of their associates, he said, “It is up to the courts to release them.” How can we do this? They can file their application in the court which will then decide on their petition.

Haryana: The father started talking on the phone after making the girl sit in a tub full of water, 11-month-old girl died due to drowning, there was chaos

Corona Virus: Haryana, Sikkim and Uttarakhand government extended the lockdown, know what will remain closed and what will be open