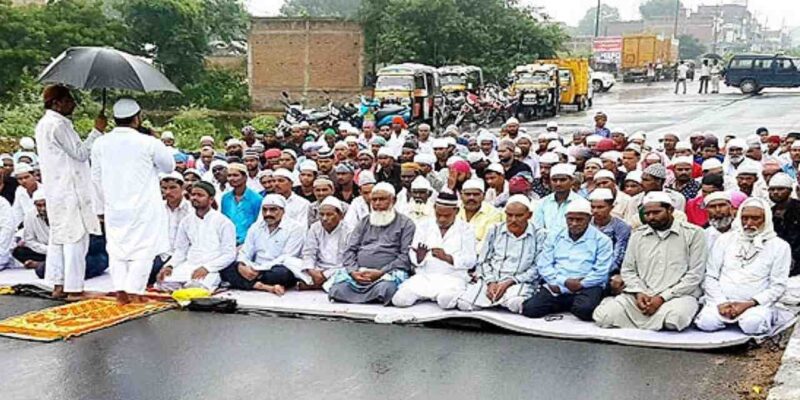 Deobandi Ulemas also say that Namaz on the road is impure.

In the Sector 47 area of ​​​​Gurugaon, the matter of offering Namaz at the vacant place is getting deeper. Along with the opposition of the local people, now many religious and social organizations including Vishwa Hindu Parishad, Bajrang Dal and Karni Sena have also started opposing it. On Friday also, when people objected to offering Namaz in the open, then under the supervision of Gurgaon Police, Namaz was offered at a distance of 150 meters from the place marked for Namaz. In fact, 30 to 35 residents of Sector 47 at 1 pm on Friday, shouting slogans of ‘Stop Namaz in open places’ and ‘Provide Namaz in mosques’ and ‘Bharat Mata ki Jai’, were in front of the Vigilance Bureau office of Sector 47. began to gather in the field.

All these people sat there and started singing bhajans. Although the protesters wanted to go to the place of prayer and perform bhajan kirtan, but the police stopped them from going there by putting up barricades. The protesters say that Muslims should offer prayers at their homes, mosques or Waqf Board properties. Blocking the roads is not right.

According to a news published in the Indian Express, the residents of Sector 47 are concerned about their safety. Residents say that earlier only 20 people used to offer Namaz at this place. But now seeing their number has reached 200. He says that he does not know who these outsiders are. Along with this, now gradually petty crimes are also increasing in this area and due to these 200 people, the crowd in the area is also increasing very much. Residents of Sector 47 say that they will continue to protest peacefully till their problem is not resolved.

Is this land jihad?

The residents of Sector 47 believe that all this is being done under an international conspiracy. The 200 people present here who offer Namaz are offering Namaz here under the conspiracy of Love Jihad and Land Jihad. They believe that if they do not raise their voice, then tomorrow these people will build a mosque here. However, this matter regarding offering Namaz in the open is going on not from today but from 2018. At that time, the administration had resolved the issue by making the representatives of both the communities seated together and had marked the site 37 of Sector 47 for Namaz. However, the protesters protesting against Namaz believe that this permission was not permanent. Rather, this permission was given only for 1 day.

Do you read Namaz in the open under compulsion?

In fact, the argument of the Muslim community for offering Namaz in the open in Sector 47 is that they do not have enough space to offer Namaz. He says that there are more than 5 lakh Muslims in the city and the number of mosques is only 13. In such a situation, they have to worship Allah in the open under compulsion. This community says that we offer Namaz here only for 15 minutes, so we appeal to the citizens here to allow them to offer Namaz here in peace.

Whereas the protesting residents say that if any place has been earmarked for offering prayers, then first of all the residents of the surrounding area should have been consulted. But before giving this place for Namaz, he was not consulted even once and as far as 2018 is concerned, even at that time permission was given only for 1 day and there is nothing in writing about that too.

According to a news published in the Indian Express, former Rajya Sabha MP Mohammad Adeeb has expressed displeasure over this matter and said that I am sad to see this. Whose country has this become? What kind of country has this become? Where people are not being allowed to pray. Which is their constitutional right. Those who are opposing worshiping should be ashamed of their behaviour. On the other hand, BJP leader Arun Yadav says that the administration should allot another place for Namaz. The people who gather here for Namaz are increasing continuously. People around Sector 47 have become apprehensive about security. A few days ago, there is also news of some sophisticated weapons being caught in this area. Yadav says that all the land of Waqf Board is lying in the city for Namaz, why is it not being used for this pak work? NewsNCR Digital tried to talk to the chairman of the Waqf Board of the state, former MLA Zakir Hussain, on this issue, but without success. They also did WhatsApp but could not get any reply.

Attempt to spoil the communal atmosphere in Gurugram

For the last several years, such activities are being heard in Gurugram, which seem to be trying to spoil the peaceful atmosphere of the city. Since 2018, many things have been trying to spoil the atmosphere here by offering Namaz in the open. Apart from this, the climate of the city has kept deteriorating, be it the clashes between cow protectors and cow smugglers or forcibly closing the shops of meat vendors during Hindu festivals. If such incidents happen in a city that has made its mark for the software industry all over the world, then it can be unfortunate for the whole country.

Vaccine is the only weapon against corona, vaccination reduces the risk of virus spread inside homes: Study

Before IPL 2021 Final, KKR player got good news, fiance gave birth to child, will now get trophy too?