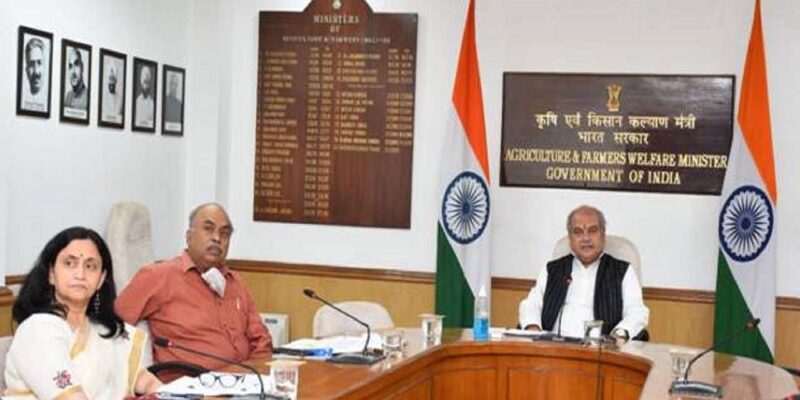 Under a special program by the Union Ministry of Agriculture and Farmers Welfare, 8,20,600 seed minikits will be distributed free of cost in 343 identified districts of 15 major producing states of the country. This program will increase the production and productivity by increasing the seed replacement rate, which will increase the income of the farmers. It started from Morena and Sheopur district of Madhya Pradesh where the distribution of mustard seed mini kit worth about two crore rupees was inaugurated by the Union Minister for Agriculture and Farmers Welfare Narendra Singh Tomar.

This program has been started under the National Food Security Mission (NFSM)-Oilseed and Oilpalm Scheme. Union Minister Tomar informed that after micro-level plan for the major mustard producing states of the country, approval has been given to implement seed minikit distribution of rapeseed and mustard program this year. The ministry has approved 8,20,600 seed minikits, consisting of seeds of high yielding varieties of productivity more than 20 quintals per hectare, for distribution in 343 identified districts of 15 states. The program covers all the major producing states of Madhya Pradesh, Bihar, Chhattisgarh, Gujarat, Haryana, Jammu and Kashmir, Jharkhand, Odisha, Punjab, Rajasthan, Uttar Pradesh, Uttarakhand, Assam, Arunachal Pradesh and various districts of Tripura. Rs 1066.78 lakh has been allocated for this programme.

Tomar told that M.P. K Morena and Sheopur, Banaskantha in Gujarat, Hisar in Haryana, Bharatpur in Rajasthan and Etah and Varanasi districts of Uttar Pradesh have been selected for distribution of hybrid seed minikits under pilot project during this year. In these 7 districts of 5 states, out of total 1615 quintal seeds, 1,20,000 seed minikits will be prepared and distributed. Green district will be given 15 thousand to 20 thousand seed minikits.

In addition to the regular programme, three TL hybrid high yielding varieties of mustard have been selected for seed minikit distribution. The selected varieties are JK-6502, Champion and Dawn. Hybrid is selected due to higher yield than HYV. The objective of the seed minikit program is to polarize new varieties with high yield potential and other useful features. Farmers of adjoining districts will have faith in these varieties, as a result of which farmers will adopt it on a large scale.

Tomar said that under the leadership of Prime Minister Narendra Modi, work is being done on a mission mode to make the country self-reliant by increasing the production and productivity of pulses and oilseeds. In this sequence, the National Mission for Oil Palm has also been started with an expenditure of Rs.11 thousand crores. Since assuming office in 2014, Modi ji has emphasized on improving the condition of farmers. Under the PM-Kisan Samman Nidhi for income support to the farmers, six thousand rupees every year. are being given and M.P. In Chief Minister Shivraj Singh Chouhan four thousand rupees each. Giving separately annually.

Similarly, a plan has been brought to form ten thousand new Farmer Producer Organizations (FPOs), so that the farmers collectively get all the facilities and their income increases. Procurement on MSP is increasing day by day. Farmers should also try to reduce their cost through various schemes. He urged the farmers to save water in farming and also use alternative fertilizers.

In the ceremony, M.P. Minister of Agriculture Bharat Singh Kushwaha said that there is a lot of mustard production in this area, now it will increase further by getting these hybrid seeds by the Union Ministry of Agriculture and Farmers Welfare. Farmers are getting very good prices of mustard, which goes to the Union Minister Mr. Tomar, who has ordered to stop the adulteration. Kushwaha urged the farmers to sow more and more mustard seeds, which would increase their income. He thanked the Union Minister Tomar for giving many gifts one after the other.

Agriculture Secretary Sanjay Aggarwal said that self-reliant India will be built through self-reliant agriculture. Working in this direction, programs have been taken up by the Ministry. Hybrid seeds are being distributed free of cost for the first time. Joint Secretary Shubha Thakur coordinated this program. Initially the Collector of Morena B. Karthikeyan delivered the welcome address. Sheopur Collector Shivam Verma expressed his gratitude.

Also read: Farmers should earn big by cultivating cloves! Know all the things related to it

Also read: Through sheep rearing, you can earn better in less cost, you will also get discount on loan, know how

Today is the last date to apply for 313 posts of Graduate Trainee in ONGC, apply soon