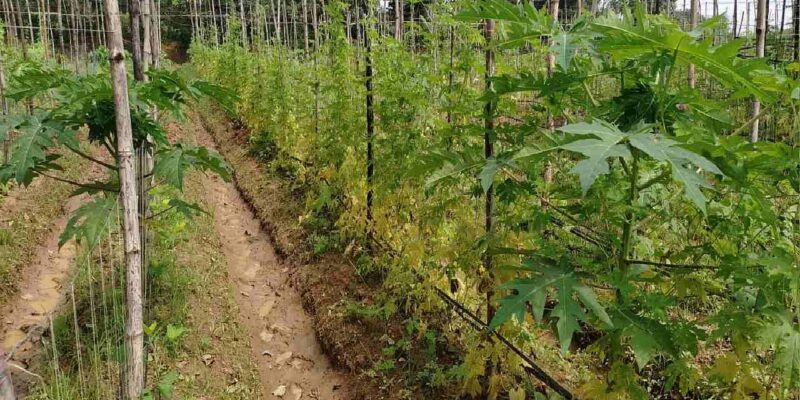 The farmers of Jharkhand are also adopting new technology of agriculture. Here too, new experiments are being done in agriculture, so that production can be increased, the demand can be met according to the market and the income of the farmers can be doubled. Apart from this, efforts are being made to promote organic farming in the state. Even in the non-traditional farming system, now conventional cow dung manure is being used. To make the farmers aware and to inform about the new method of farming, agricultural scientists are also engaged, who are developing the farming method according to the climate and soil of Jharkhand. Five layer farming is also a form of this.

Siddharth Jaiswal, CEO of B.A.U. Society, BPD (Business Planning and Development), Birsa Agriculture University, said that multi-layer farming is completely natural farming. Organic manure is used in this. Indigenous seeds are used. Due to this the yield is also getting better. In fact, if Jharkhand cultivates tomato on the entire land, if some disease comes in that crop, then it spreads in the whole field. Due to this, the crop or vegetable of the entire field would get ruined. But the multi-layer farming method is different from this, it does not cause much loss to the farmers.

Siddharth Jaiswal, CEO of BPD (Business Planning and Development) BAU Society of Birsa Agricultural University, said that multi-layer farming is being done as a pilot in Dublia of Kanke block. The people of the city have cultivated together in the farm made in Dubalia. Farmers can come here and learn about this method. After that this method will be adopted on a large scale. In multi-layer farming, the bed is prepared in the east-west direction so that sunlight is available throughout the day. In this, in the first layer, vegetables grown inside the ground like potatoes, onions, radishes are grown. In the second layer, vegetables grown just above the ground such as cabbage, in the third layer bushy vegetables like tomatoes, in the fifth layer, vegetables are planted and then greens are planted on the space left in the ground.

Read also: The fragrance of saffron is returning again in Kashmir’s fiza, farmers are excited to get the GI tag, hope for good earnings this time

People of these 3 zodiac signs are sweet talkers, know