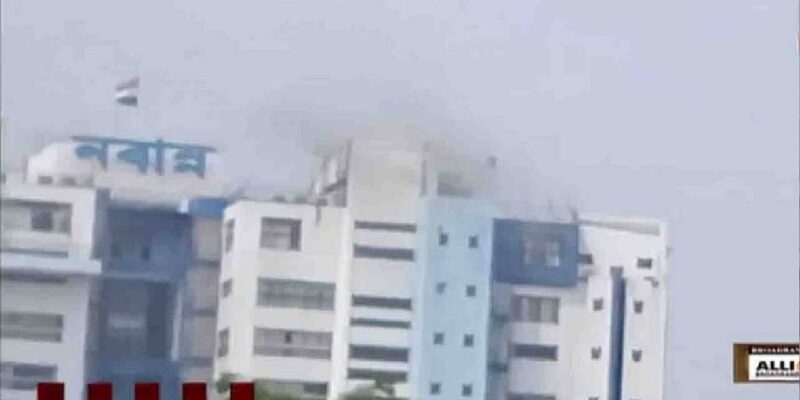 Image: Fire broke out at Nabann, the state secretariat of West Bengal.

The State Administration Headquarters of West Bengal Nabann (Nobanno) in Durga Puja (Durga Puja) of the morning fire of Mahasaptami (Fire) The incident caused a stir. On Tuesday morning, when there was a festive atmosphere across the state, a fire was reported on the 14th floor of Nabann. Black smoke was seen rising from the roof of Naban. This has created panic in the entire area. With the promptness of the Fire Brigade, the fire was brought under control immediately. State Chief Secretary HK Dwivedi has ordered an inquiry into the entire incident.

Senior ministers including CM Mamta Banerjee have offices in Naban

Naban is the administrative headquarters of the State Secretariat. There is an office of top ministers and top officials including CM Mamta Banerjee, but due to the holiday, neither Mamta Banerjee nor top officials were present in Naban. According to sources, a private company has a mobile tower on the roof of Naban. There has been an incident of fire after a short circuit in the same. Firefighters are stationed 24 hours a day in Naban. As soon as the information about the fire broke out, the firefighters immediately extinguished the fire with full readiness. No major damage has been reported.

But how did the fire broke out in the state administration headquarters? The investigation of this matter has started. Senior officials of the state administration and police officials have reached the site of the incident. The incident site is being investigated. State Chief Secretary HK Dwivedi has ordered an inquiry into the entire matter. The Director General of Fire Affairs has constituted a committee to investigate the incident of fire. At the same time, the Chief Secretary has directed the Secretary of the Public Works Department to conduct a fire audition. Please tell that the responsibility of the maintenance of Naban lies with the Public Works Department.

Kolkata Building Collapsed: Accident during Durga Puja in Kolkata, 1 killed and 4 injured when a part of house collapses