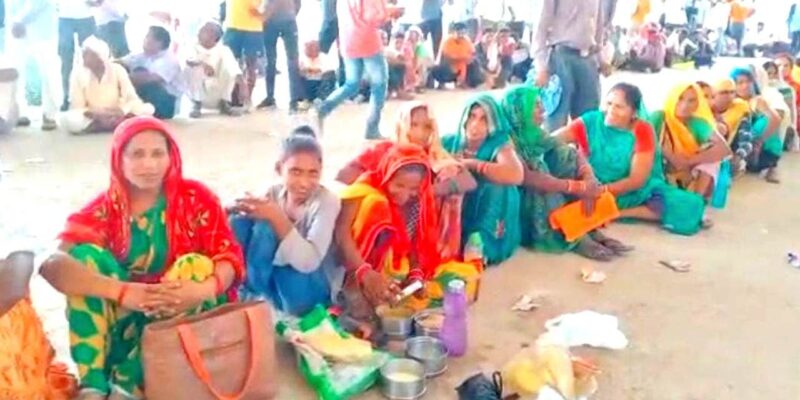 A crowd of women farmers engaged for fertilizer near a cooperative store in Bhind.

Whether it is Kharif season or Rabi crop, one thing is common in both. No province is left such that there is no long line of farmers for fertilizer. There should be no shortage of it (Fertilizer Crisis). Some traders should not do black marketing of it. This time too there is hustle and bustle on paper. The supply of manure is more than the demand, while the ground situation is such that farmers have to fight for manure. Somewhere it is being stolen and somewhere it is being looted.

DAP imports have decreased this year

The agriculture ministers of the states ruled by the ruling party at the center are giving statements that everything is fine, while those ruled by the opposition parties are revealing. The farmer is getting crushed in this game of manure. According to a data received from the Union Ministry of Chemicals and Fertilizers, the central government has imported 17.38 lakh metric tonnes less of DAP in 2020-21 as compared to 2018-19. Hence there is a huge gap between demand and supply.

Some traders have turned this difference into an opportunity to earn big money. Due to which the farmers are upset. This has been confirmed by the Agriculture Minister of Rajasthan Lalchand Kataria. According to him, “The supply of DAP fertilizer in our country is largely dependent on foreign imports. Due to less imports this year, the demand and supply gap of DAP has increased across the country.

ground situation in the states

There is a shortage of 2 lakh tonnes of Urea and 4 lakh tonnes of DAP (Di-ammonium Phosphate) in Madhya Pradesh this year as compared to last year. The time has come for sowing of Rabi crop in 29 districts of the state but enough fertilizers are not available. This is the condition of the Union Agriculture Minister’s home state. In Morena, troubled farmers tried to loot manure. On the other hand, in Bhind, the farmers of Gyanpura village of State Cooperative Minister Arvind Singh Bhadauria have been accused of stealing fertilizers.

Farmers are worried about the lack of DAP in many districts of Haryana, the country’s major mustard and wheat producing state. Therefore, Agriculture Minister JP Dalal had to hold a meeting with the officials of the fertilizer companies. In the meeting, instructions were given to make available fertilizers according to the demand in the mustard sown areas.

There is a fight for DAP in many districts of Uttar Pradesh. DAP is not available on co-operative societies. Whereas the sowing of potatoes and wheat is on the head here. Farmers are very upset in the belt of Agra, Mathura.

Sowing of Kharif crops starts from October. Especially wheat, mustard and potato. In such a situation, farmers are compulsively buying DAP by paying a higher price in black. However, according to the report of the Ministry of Chemicals and Fertilizers, from October 1 to 12, more fertilizers have been supplied than the demand. While talking about the supply for the whole of October, there is a slight shortfall in the supply as per the demand of DAP. However, the supply of other fertilizers is more.

What is the demand for complex fertilizers?

National Farmers Progressive Association (RKPA) President Binod Anand questions that what are the powers in all the states which are making DAP disappear overnight. From which power center they are getting this power? Who is troubling the food donors while the governments raising slogans of farmers’ interest? Do black marketers live in space that the police are not able to catch them? From fertilizer companies to the Chief Secretaries of the states responsible for distribution are under the scanner regarding this matter?

Madhya Pradesh: There has been a huge reduction in the production of tomatoes due to heavy rains and disease, the cost has also doubled, now the price has reached the sky.