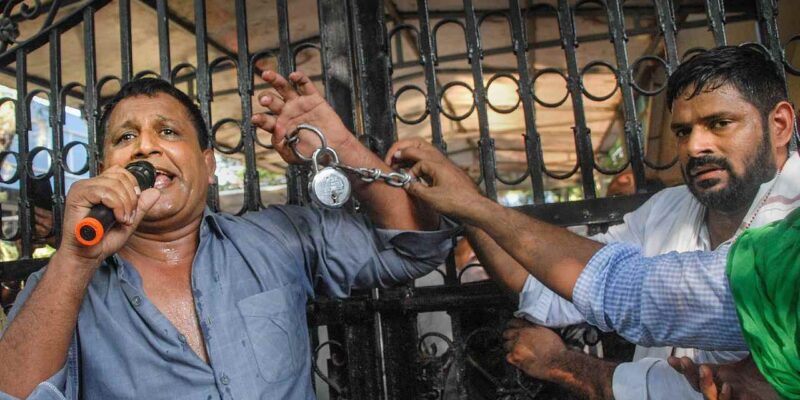 The agitation of farmers of 81 villages, which was going on for 41 days against the Noida Authority for various demands including settlement of population, developed plot, became furious on Monday, they reached the authority office and created a ruckus. Thousands of farmers sitting on dharna in Harola procession house reached the authority office on Monday. When the police tried to stop them, they broke the barricading of a gate and a place.

It is alleged that during the uproar, the farmers tore the uniforms of police officers and many policemen. After this, the police had to use lathi charge and mild force to control the situation. Farmers have been protesting here since September 1. Sukhbir Khalifa, President of the Indian Council of Farmers, who is leading this strike, has issued a press release saying that while marching towards the Noida Authority’s office, the police administration tried to stop the farmers and lathi-charged the farmers. He says that many women and men of the farmer family have been hurt in this incident. His treatment is going on in the district hospital.

Farmers will go to authority everyday

Khalifa said on this behavior of the police that now the police department is also speaking the language of the Noida Authority and it has become bent on misbehaving. He has said that the Bharatiya Kisan Parishad will now do something daily till the Noida Authority’s office. He said that more than 15 thousand people are involved in this dharna. The responsibility of their security rests with the police and district administration.

He said that we will protest our protest by staying within the purview of discipline, and will end the dharna only after taking our rights. Noida Police spokesperson says that under the guise of protesting farmers, some chaotic elements beat up the police personnel. He said that the uniforms of many policemen including ADCP Ranvijay Singh were torn and they were subjected to indecency. ADCP Rannvijay has said that efforts are being made to identify all the chaotic elements and strict action will be taken by registering a case against them.

In fact, in view of the strike by the farmers, a heavy police force was deployed in front of the Noida Authority office since this morning. The protesters wanted to reach the authority office in any case. When the police tried to stop them, the farmers got furious. The main demands of the farmers are that the population should be disposed of, five percent developed plot should be given to them in their acquired land, they should be compensated at the increased compensation rate.

Gang war broke out in Delhi! Now in Rohini, a gangster of Tillu gang has been shot dead, police engaged in investigation