Farmers are happy with the rising prices of betel nut, expect good income along with harvesting 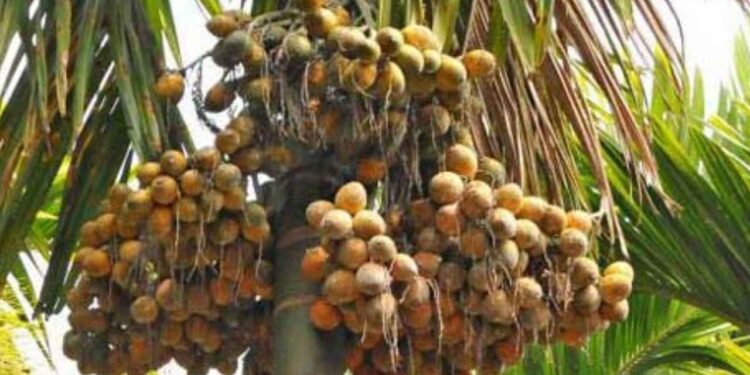 At present one kg red betel nut is being sold at Rs 545 per kg and the average price is around Rs 530. Similarly, the price of old white betel nut has gone up to Rs 505 per kg and that of fresh betel nut to Rs 460 per kg.

Farmers are very happy with the rising prices of betel nut.

Farmers are happy at this time with the rising prices of betel nut. They are hopeful that if the increased prices persist, then there will be a good income along with harvesting. At present, the farmers who have stock are earning well.

According to a report in The Hindu, currently one kg of red betel nut is selling at Rs 545 per kg and the average price is around Rs 530. Similarly, the price of old white betel nut has gone up to Rs 505 per kg and that of fresh betel nut to Rs 460 per kg.

Jaya Bhandari, who works with the Central Areca and Cocoa Marketing and Processing Cooperative Limited (CAMPCO), said, “The arrival of fresh red arecanut has started, so the price which had gone up to Rs 600 per kg has been reduced recently. has occurred.’

Small farmers will not get the benefit of increased prices

The betel nut market watchers believe that the price is increasing due to the increase in demand. Bhandari said, ‘There is no betel nut stock in North India. The producers and traders who have stocks are making profits.

Farmers get eight to 10 quintals of arecanut per acre. Considering the prevailing rates, farmers with two or three acres of plantation can also earn handsomely. But, the small growers hardly get any benefit as they sold their stock long back.

In fact, rains continued in many parts of betel nut growing areas in Karnataka. Due to this there was a delay in the harvesting of the crop, which increased the prices. Chandreshkhar, a betel nut farmer, says, “We sell the produce immediately after the harvest. If the current prices continue, we will earn well this time.

Some farmers are worried due to yellow leaf disease

Arecanut growers are facing problems in some parts. There has been a drastic decline in plantation and yield in the last few years due to yellow leaf disease. Some gardeners are getting only a few kilos per acre.

A farmer Srinivasa Murthy said that we are fighting yellow leaf disease to save our gardens. He also said that the unusual increase in prices will create social problems. This will further widen the gap between big and small producers.

Also read- Estimates of record yield due to good rains, production of Kharif crops may be 150 million tonnes