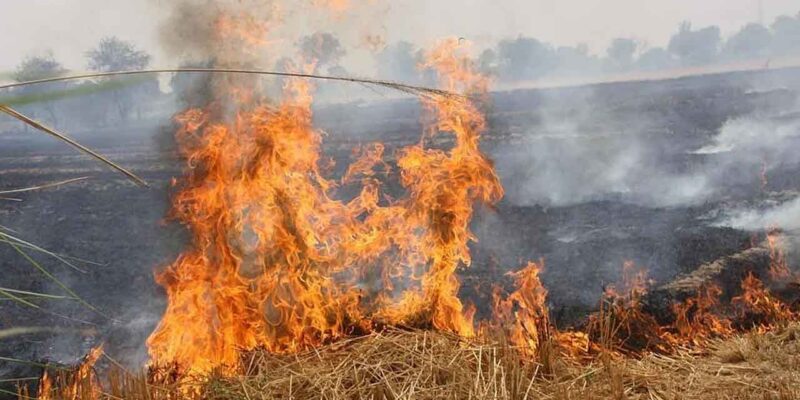 All the efforts made to stop the burning of stubble seem to be in vain. Once again farmers in Punjab have started burning stubble. They say that we are left with no other option. Regarding the increasing air pollution due to stubble burning, farmers say that vehicles, factories and many other things also pollute the air, then why only farmers are being blamed for this.

According to a news agency ANI, the farmers are angry that they are not being given 50 percent compensation for not burning the stubble as per the announcement made in September. Farmer Ram Singh of Bathinda, Punjab said that we are left with no option but to burn the stubble. We have not been given any financial help for bundling the paddy stubble, whereas the cost of this work was 5000 to 6000 rupees per acre.

‘It is our compulsion to burn stubble’

He said that the time for sowing of Rabi crops has come, so it is their compulsion to burn the stubble. On the increasing air pollution, Ram Singh asked that many places are very polluted. Vehicles, factories and other things also increase air pollution. No one is saying about those things, then why are we being blamed for spreading air pollution?

Ram Singh said that our family can also be affected by air pollution. But we have no other option. He said that stubble burning is not the only reason for increasing pollution. Another farmer Ravinder Singh said that if the government takes any legal action against him, they will remind him about the compensation announced earlier.

To prevent incidents of air pollution and stubble burning, Rs 496 crore was released by the central government for Haryana, Uttar Pradesh and Punjab in September this year. Its purpose was that instead of burning the stubble, farmers should manage it by other means and buy the necessary machinery on subsidy.

Agricultural experts say that this time due to rains, there has been a slight delay in harvesting of paddy. At the same time, all the options other than burning the stubble, all take at least 15 to 20 days. In such a situation, the farmers are forced to burn the stubble to make the sowing of Rabi crops on time.

Also read- Now the government will give subsidy on potash made from molasses, the Fertilizer Ministry said – the income of sugarcane farmers will increase

Drunk in alcohol and anxiety, Kapil Sharma was helped when Shahrukh Khan had a fight with Sunil Grover

West Bengal: In the gang rape case, two RSS functionaries including Kailash Vijayvargiya got a big relief from the High Court, know the whole matter