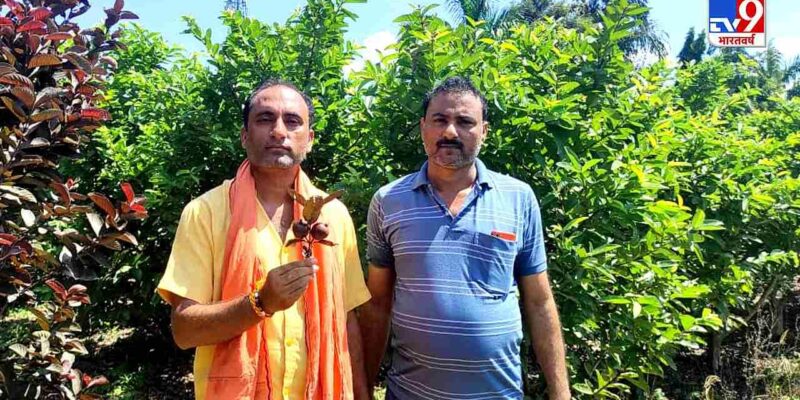 In Banaras, famous all over the world for religious tourism, two farmer brothers are now preparing for Agro Tourism. Where tourists will not only get an atmosphere of peace, but they will also be able to get acquainted with Indian traditional farming, animal husbandry and fisheries. People coming here will not only get to see the variety of world’s famous guava, they will also be able to see the world’s most expensive mango Miyazaki. Shailendra Raghuvanshi and Saurabh Raghuvanshi, the progressive farmers of Babiano village, located 20 km from Banaras city, are busy in its preparation.

This village is in the Lok Sabha constituency of Prime Minister Narendra Modi. Shailendra and Saurabh Raghuvanshi are trying to fulfill the proverb about the cost of mango kernels. He has a 12-acre guava orchard in the village. Guava and its saplings grown in it earn good income. Now he has consulted an agency to develop the conditions of agro tourism in it. We had visited this magnificent garden a few days back.

What will tourists get to see

In a conversation with TV-9 Digital, Shailendra Raghuvanshi told that not only are there famous varieties of guava, the rest of the organic farming, fisheries, animal husbandry will also be seen. Desi cows. Arrangements will be made for the accommodation of tourists. There will be organic food. The famous langa mango of Banaras is planted in this campus. Five plants of Miyazaki, the world famous species of mango, have also been planted from Japan. It has been procured through an agency in Poona. Kashi Darshan will already be included in this package. Tourists will be told about traditional farming. Where there is religious tourism, will agro tourism succeed?

Senior journalist of Purvanchal Vijay Vineet told that the entire tourism of Banaras city is worth about 10 thousand crores annually. On an average, a tourist coming from outside stays here for only one and a half days. Many foreign tourists get troubled by pollution here. In such a situation, if the package of agro tourism is added with religious tourism, then it will become icing on the cake. Till now there is no concept of agro tourism in the entire Purvanchal. In such a situation, if it starts from Banaras, then a new way of earning good income will open for the farmers of other districts which are prosperous in terms of tourism.

Progressive Farmer Raghuvanshi brothers are known for horticulture in the entire region. He also gives training to the farmers. Guava fruits and plants are sent from them to almost all the states of the country. Shailendra Raghuvanshi told that till now he has sold more than 20 lakh saplings. Guava varieties of Thailand and Taiwan are also enhancing the beauty of their garden. He tells the farmers how to leave traditional farming and earn good money from horticulture.

Government will open 100 government and private schools affiliated to Sainik Schools across the country, education will start from 2022