Earlier the distance from the majority, now the caste became the compulsion of the BJP, the Chief Ministers of these states can change before the elections! 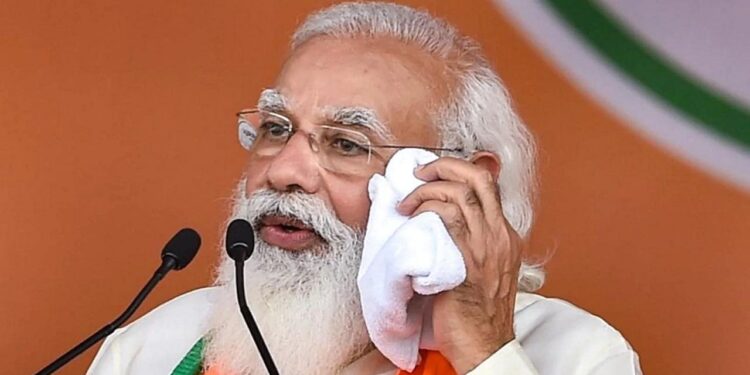 BJP now sticking to caste calculations: After Uttarakhand and Karnataka, the latest example is from Gujarat, where the BJP bowed to the demand of the majority and dominant Patidar community, removed Chief Minister Vijay Rupani from the post and made Bhupendra Patel the new Chief Minister.

The Bharatiya Janata Party has assigned the post of Chief Minister to leaders of non-dominant castes in many states, but seeing the recent changes, it seems that the BJP has had a change of heart. The change of chief minister by the party just before the assembly elections in the last few years shows that the party has changed its strategy by giving importance to the caste chief and this is the reason why in the states having assembly elections, the dominant caste there before the elections. The faces of the people were made to sit on the CM’s chair.

After Uttarakhand and Karnataka, the most recent example is that of Gujarat, where the BJP, bowing to the demand of the majority and dominant Patidar community, removed Chief Minister Vijay Rupani from the post and made Bhupendra Patel the new Chief Minister.

However, the BJP has been known to elect non-dominant caste leaders as chief ministers. Whether it is about Haryana Chief Minister Manohar Lal or former Maharashtra Chief Minister Devendra Fadnavis. Both these leaders were chosen by the Narendra Modi-Amit Shah leadership from outside the Jat and Maratha communities. Out of which Khattar is still sitting on the Chief Minister’s post, although there is a lot of discussion in the political corridors that before the Haryana Assembly elections to be held in 2024, the BJP can change the Chief Minister and on the lines of Gujarat, there is also a caste-community prominent face. Can be made the CM of the state. However, this too is just a speculation.

In 2016 the Chief Minister was elected against the Patidars.

In 2016, when the Patidar movement was at its peak, the BJP sent out a strong message by electing Rupani, a Jain. This was the first time that a member of this community had become the chief minister. At the same time, despite the claims of many contenders, including Patel leaders, in the 2017 elections, the BJP made Rupani, who comes from a non-caste, the chief minister. This was the time when the number of BJP members in the assembly also decreased. The BJP, which had won 115 seats in the 2012 assembly elections, could win only 99 seats in 2017 with a loss of 16 seats. However, now just before the elections to be held in 2022, BJP has chosen Bhupendra Patel as CM instead of Rupani.

With this change, BJP leaders accepted that the election of Bhupendra Patel indicates that despite Modi being at the helm, the BJP cannot avoid electoral compulsions. However, even in the election of the new CM, PM Modi has left the mark of his style, he has once again surprised everyone, bypassing the names of other big and experienced Patel leaders and chose the face of becoming an MLA for the first time. .

Rawat’s farewell in Uttarakhand is also an example

Earlier, in Uttarakhand, the BJP removed Trivendra Singh Rawat from the post of Chief Minister under pressure from both the party factions in the state and the RSS, it was told that the Chief Minister’s work and performance was not better in 4 months. Rawat was replaced by another Thakur, Pushkar Singh Dhami, who hails from the party’s stronghold.

Something similar was also seen in Karnataka politics. BS Yediyurappa, who had been CM there four times, had to step down from his post under pressure from Delhi. However, here the BJP did not dare to oppose his community, despite all the speculations, the BJP chose Basavaraj Bommai from the Lingayat community in place of Yeddyurappa. His father S.R. Bommai has also been the Chief Minister of Karnataka.

In 2014, the party did many experiments, now there is a need to change!

After coming to power in 2014, the Modi-Shah-led BJP had taken the decision of electing chief ministers from outside the dominant castes as an ‘experiment’. This was the time when Modi was at the peak of his popularity and even he was considered invincible. The party had given a clear message by electing leaders from non-dominant castes that the party did not feel the need to enter into old ties with the dominant castes. This was the reason that despite being a Brahmin and non-Maratha in Maharashtra, Fadnavis became the CM in Maharashtra, Khattar took over as the Chief Minister in Haryana despite being a non-Jat, while Raghubar Das, a non-tribal, was made the Chief Minister in Jharkhand.

Experiment failed in Maharashtra and Jharkhand, danger in Haryana too!

However, since then the BJP has faced defeat in elections in Maharashtra and Jharkhand and has managed to save the government in Haryana with the help of the newly formed Jannayak Janata Party. Khattar has been under pressure since the assembly elections and now the farmers’ agitation has added to his concerns. This is the reason that the speculations of change of Chief Minister in Haryana have also intensified.

According to the Indian Express report, two senior BJP leaders admitted that the party is under pressure not to ignore the larger castes and communities that draw large numbers of support. The central leadership of the party may also come under pressure from state units in other states. In recent times, the developments of changing Chief Ministers will encourage disgruntled leaders in other states as well.

Those who closely watch politics say that the demand for making Deputy Chief Minister Keshav Prasad Maurya as Chief Minister in Uttar Pradesh may gain momentum. He comes from OBC and the party can take a shocking decision to woo this OBC. However, in his address given in Aligarh, Uttar Pradesh on Tuesday, PM Modi heaped praise on Yogi Adityanath as CM. So this is just speculation. Apart from this, an influential faction of the party in Madhya Pradesh is also insisting on the replacement of Shivraj Singh Chouhan. However, whether the party will make changes here or not, time will tell.

read this also: How will it affect the UP elections? PM Modi lays foundation stone of university in Aligarh in the name of Jat Raja Mahendra Pratap Singh