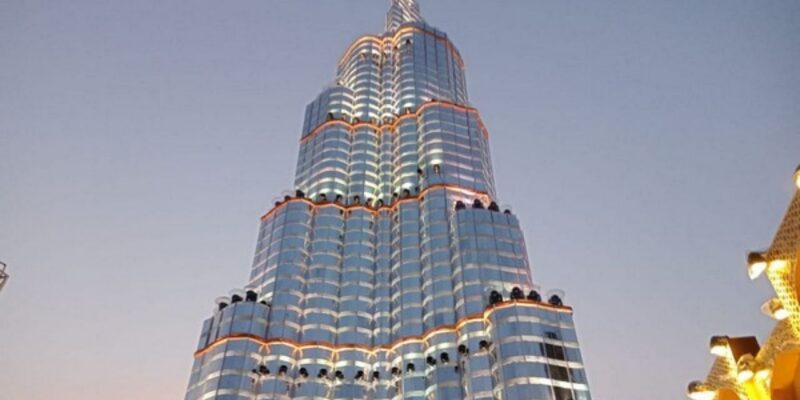 A Durga Puja pandal in Kolkata has been designed like the world’s tallest building ‘Burj Khalifa’ in Dubai. A huge crowd of people is gathering to see it at Shree Bhoomi Puja Pandal in the Lake Town area of ​​Salt Lake City. A huge crowd gathered here after lighting the pandal on Tuesday evening, after which policemen were seen removing people from there. Earlier on Monday too, there was traffic jam throughout the day due to the gathering of people here.

This pandal is 145 feet high. It has been made with the help of 6,000 acrylic sheets. The lighting of the pandal has been done in such a way that it remains the center of attraction across the city. More than 250 laborers have prepared it after working hard for three and a half months day and night. At night, 300 different types of lights are scattered in the pavilion. The pictures of the pandal are also becoming very viral on social media.

State Fire Minister Sujit Bose said that like previous years, the organizers have decorated the idol of Goddess Durga with 45 kg gold this time too. Bose is one of the office bearers of Durga Puja Committee. He told that last year the pandal here was built on the lines of Kedarnath temple.

The light emanating from the pandal is causing problems in flight and landing of aircraft at Netaji Subhas Chandra Bose Airport, located a few kilometers from here. Airport sources said that the pilots of three different flights have complained to Kolkata ATC regarding this. He told that ATC has informed the Kolkata Airport Authority about this.

Kolkata pandals made on different themes

Every year different contemporary themes are given place in the puja pandals of Kolkata. This time too many organizers of Durga Puja have prepared their pandals and idols on the basis of issues like farmers’ movement, National Register of Citizens (NRC) and Partition of India. Naktala Udayan Sangh, one of the major clubs, has kept the theme of its pandal as the exodus of refugees by train.

Samrat Nandi, spokesperson of the Nakatala Udayan Sangha, told news agency PTI, “We have reconstructed a train carrying refugees from Pakistan to show the suffering of the displaced.” Conceived and managed by Bhabtosh Sutar, the illustration draws on references from Khushwant Singh’s novel Train to Pakistan and Atin Bandyopadhyay’s ‘Neelkantho Pakhir Khojhe’.

Referring to NRC regarding the status of displaced people

The Barisha Club in Behala has put its theme of worship on the NRC, highlighting the plight of the displaced people. Titled ‘Bhager Maa’ (Parted Mother), the anxious looking statue of the goddess symbolizes the plight of hundreds of mothers who had to leave their homes and walk the path of uncertainty. However, she is seen holding an idol of Durga, which signifies that she is determined to continue the puja, which was celebrated with much fanfare in her ancestral home.

The organizers of Dum Dum Park Bharat Chakra Club Puja depicted the farmers’ movement by placing a replica of a tractor on the way to the pandal. The tractor has two parts, on which the names of the farmers killed in the agitation are written. Pooja also courted controversy over the use of hundreds of shoes to represent police crackdown on agitating farmers. The Bharatiya Janata Party accused the organizers of hurting religious sentiments and demanded that the shoes be removed from the pandal immediately.

‘Countries facing conflict have to face challenges for peace’, said Minister of State for External Affairs Muraleedharan at UNSC

This woman has not eaten any vegetable since childhood, there is panic on seeing it; Know what is the reason