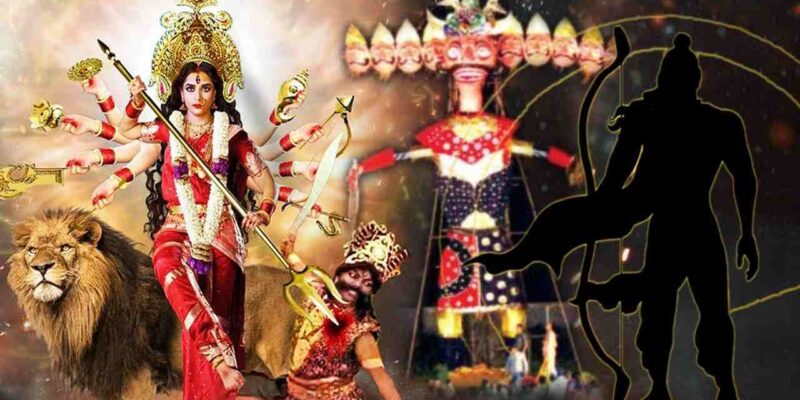 There are mainly 2 religious stories about Dussehra. The killing of Mahishasura by Goddess Durga and the end of Ravana by Lord Shri Ram. This festival of Hindus is celebrated as a symbol of victory of good over evil. Uttar Pradesh, Bihar, Delhi, Madhya Pradesh, Northeast India, South India… Dussehra is celebrated in different ways in different parts of the country and unique colors are seen everywhere.

In Navratri, devotees keep fast for 9 days and sometimes for 8 days. Kalash installation is also done on this occasion. Many devi devotees get the Kalash installed on their chest. Navami is celebrated on the next day after Havan i.e. Vijayadashami in a unique way. Here we are going to tell about 10 special traditions of Dussehra.

1. With Ravana Dahan in Uttar Pradesh

In Uttar Pradesh, Dussehra is celebrated by setting fire to the idol of Ravana along with Ravana Dahan. It depicts the victory of good over evil. In cities like Varanasi, Lucknow and Kanpur, Ramlila is performed on a grand scale at major places of the city. Actors dressed as Lord Rama, Lakshmana and Hanuman perform the epic saga using audio visual equipment and the audience is enthralled to see them kill the idols of Ravana, Kumbhakaran and Meghnath. A state in Eastern India In many cities too, there is a tradition of burning Ravana, while in many cities, the pandals of Durga Puja are wonderful.

2. With the amazing Ram Leela in Delhi

Dussehra is celebrated as the defeat of Ravana by Lord Rama with the wonderful Ram Leela staged in Delhi. On this eve, temples are decorated in a very splendid way. On this day effigies of all the three demons including Ravana, Meghnad and Kumbhakaran are set on fire across the city. Meanwhile, most people in the city observe a fast for 9 days. Watching Ramlila in Delhi is a beautiful experience. Not only this, there are many such places in Delhi, where pandals of Maa Durga are also made on this occasion.

3. With Garba Famous in Gujarat

In Gujarat, Dussehra festival is celebrated with the famous Garba. In Gujarat, the state of colours, Dussehra is celebrated as Navratri. On this day people dance ‘Garba’. It is the main attraction of the festival, which works to bring people closer. Garba is played throughout the night after the worship of Goddess Durga. For Garba, men and women wear traditional attire. There are lehenga choli for women and kedia for men.

On the other hand, Durga Puja or Dussehra in West Bengal gives the state its real identity. Actually, on this occasion, this festival fills the whole state with color. Various themed pandals are made on this occasion, where wonderful idols of Goddess Durga along with other deities including Ganesh, Lakshmi and Saraswati are worshiped for 5 days. This festival has great importance in the life of every citizen. That’s why people eagerly wait for this event for a long time. Surely, such eagerness and enthusiasm to worship Maa Durga is not seen anywhere in India.

5. With a grand procession of Lord Raghunath in Kullu

This festival is celebrated with a grand procession of Lord Raghunath in Kullu. Dussehra has a special significance in the city of Kullu in Himachal Pradesh. Here this festival is celebrated in a unique way for 7 days. The people of Kullu worship Lord Raghunath at the Mela Ground of Dhalpur Maidan. The surrounding villagers bring idols of various local deities in a holy procession to this fair ground. The entire valley is filled with festive cheer. Tourists also come here from far and wide to see this sight.

In Karnataka, Dussehra is celebrated as a carnival-like festival. On this festival the Dussehra of Madikeri is celebrated in a grand manner in Karnataka, amidst the peaceful surroundings of Coorg. This lively carnival-like festival is also known as “Mariamma Utsav” and people perform folk dances dedicated to Draupadi. This is one of the most unique ways of celebrating Dussehra in Karnataka. On this day a parade is held here, in which deities, demons and elves perform plays.

In the Indian state of Punjab, the festival of Dussehra is celebrated with 9 days of fasting and worship of Shakti. Goddess Shakti is worshiped here on this day. The people of Punjab observe a fast for 7 days during Navratri and in the meantime they also arrange Jagrata. On the 8th day on Ashtami, they open their fast in the name of Kanjika along with organizing Bhandara for 9 girls.

8. With Goddess Worship in Tamil Nadu

Kulasekarapattinam Dussehra in Tamil Nadu is a different way of celebrating Dussehra in the Indian state of Tamil Nadu. The festival comes alive during the 10-day long Dussehra festival in the state. The festival is celebrated near the Mutharaman temple, which is the center of music, dance and drama. People display an amazing array of vibrant costumes on this occasion. A distinctive aspect of this festival is the dance, in which people dance in unique costumes to the lively tunes of Thar Thappattam.

9. Nature is worshiped in Chhattisgarh

A unique type of Dussehra is celebrated in Chhattisgarh by worshiping nature, which is to please nature, spirituality and the presiding deity of the state. They worship Goddess Danteshwari (the presiding deity of Bastar). The state has unique rituals to perform on Dussehra, such as Pata Jatra (Wood worship), Deri Gadhai (setting up of an urn), Kachan Gaadi (setting up the throne for Goddess Kachan), Nisha Jatra (Night time worship). festival), Muria Darbar (convention of tribal chieftains on the last day) and Ohdi (farewell to the gods).

Like North India, Dussehra is celebrated with great enthusiasm in South India too. The Dussehra of Mysore in South India is famous in the country and abroad. The Dussehra of Mysore is a festival associated with the worship and devotion of Chamundeshwari Devi, who is believed to be a form of Bhagwati Durga. The people here believe that Goddess Chamundeshwari killed Mahishasura, which led to the victory of good over evil. The festival of Dussehra is celebrated on this occasion.

Also read: Know about that hot chili, whose 3 pieces a person ate, became a world record

Where were the other accused including Ashish Mishra during the violence? SIT did the scene recreation of Lakhimpur Kheri incident by taking them to the spot

Weight Loss: If you want to lose weight fast, then consume rose tea