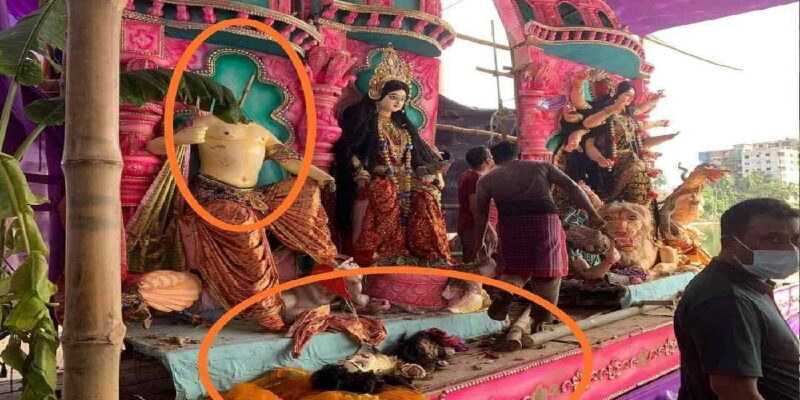 Bangladesh (Bangladesh) in Durga Puja (Durga Puja) on the occasion of many puja pandals by the fundamentalists (Puja Pandals) and the incident of vandalism with idols has heated up the politics of West Bengal. After West Bengal’s ruling party TMC, now senior West Bengal BJP leader and Leader of Opposition Shubhendu Adhikari (Suvendu Adhikari) PM Narendra Modi (PM Narendra Modi) has raised the issue of attack on Hindu minorities in Bangladesh and has sought the intervention of the PM. A copy of the letter has also been sent to Union Home Minister Amit Shah, External Affairs Minister S Jaishankar and State Governor Jagdeep Dhankhar.

Let us inform that TMC leader and spokesperson Kunal Ghosh had called for action from the Government of Bangladesh in this matter and immediate intervention from the Central Government. In recent times, the influence of radical forces in Bangladesh seems to be increasing. Even before this, Hindu temples and idols were vandalized a few days ago.

The attacks on Hindus and vandalism of Durga mata idols by the extremists in Bangladesh is unfortunate and disturbing, I strongly condemn it.
Also, I request Bangladesh govt to take necessary steps to protect minority Hindus living there & punish the culprits. @blsanthosh pic.twitter.com/vUYgoAeD5W

Bangladesh Hindu Unity Council’s tweet read, “13 October 2021, was a condemnable day in the history of Bangladesh. Many puja pavilions were vandalized on the occasion of idol immersion on the day of Ashtami. Hindus are now guarding the puja mandaps. Today the whole world is silent. May Maa Durga keep her blessings on all the Hindus of the world. Never forgive.’ The council said in a tweet that good Muslims are still alive in Bangladesh that is why we are alive. Thanks to all the Muslims who stood with the Hindus. We also respect Islam. We love Quran too. Islam never supports it. Hindu Ekta Parishad said that we want to live in harmony with our Muslim brothers in Bangladesh. Bengal BJP President Sukanta Majumdar has also condemned the entire matter.

Kolkata Durga Puja Controversy: Relief to the organizers in the footwear case in the puja pandal, the High Court refuses to interfere

What says your nails: You can know your future even by nails, know what your nails say