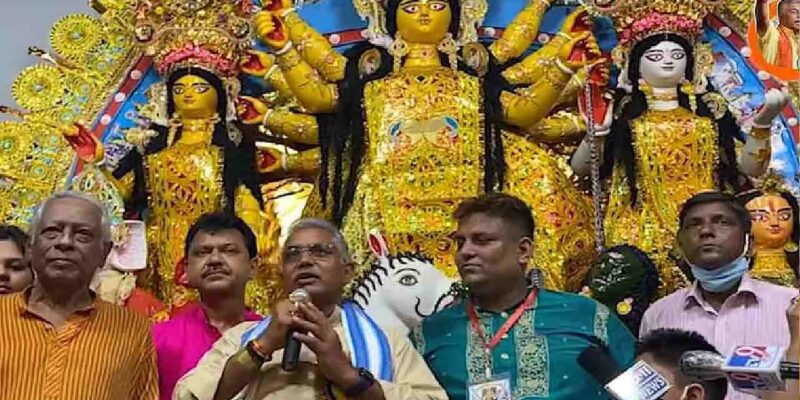 Bengal BJP (Bengal BJPOn the lines of last year, this year also Saltlake EZCC (Salt Lake EZCC) in Durga Puja (Durga Puja) have held. On the occasion of Mahashashthi, Bengal BJP President Sukant Majumdar and Leader of Opposition in the Legislative Assembly Shubendu Adhikari were present on the occasion of worship. Sukanta Majumdar and Shubhendu Adhikari played the dhaka. Along with this, while attacking the government of Mamta Banerjee, said that Sanatan Dharma is being insulted in West Bengal. On the other hand, former Bengal BJP President and National Vice President Dilip Ghosh reached various puja pandals and congratulated the people on the puja.

Last year Bengal BJP organized Durga Puja at Eastern Regional Cultural Center i.e. EZCC in Saltlake, but this year there was doubt on the organization of Durga Puja by BJP, but since once the puja is organized according to Hindu religion at least Puja has to be organized at least three times. So finally BJP decided to organize the puja.

The theme of the pandal was made for the devotion of Sri Chaitanya Mahaprabhu.

On this occasion, Bengal BJP President Dr. Sukanta Majumdar said that the movement which took place under the leadership of Sri Chaitanya Mahaprabhu is still very relevant in Bengal today. There was a time when chanting was not allowed. Sri Chaitanya Prabhu had left for the Qazi’s house while chanting the names of the devotees. There are still Qazis, though their name has changed and their form has changed, but we have to counter them with Satyagraha. Chaitanya Mahaprabhu has been made the theme of the puja pandal.

Senior Bengal BJP leader and Leader of Opposition in the Legislative Assembly Shubhendu Adhikari said that according to traditional scriptures this puja has to be performed for at least three years, so we have organized this puja by removing many obstacles and amidst the pain of martyrs. I hope the workers will participate in this puja for the next four days. He said that Sanatani culture is being attacked in Bengal. Some people are supporting keeping shoes in the puja mandap, while some are attacking in another way. Let us tell you that before the assembly elections last year, Bengal BJP organized a grand Durga Puja. PM Narendra Modi himself addressed during the worship through virtual medium. Although there was doubt about the worship of BJP since the beginning of this year, but in the end it was decided to do the worship.

Haryana: Brother murdered 12 days before sister’s wedding, ax hit in the neck of a young man who came asking for Rs 2500 for daily wage