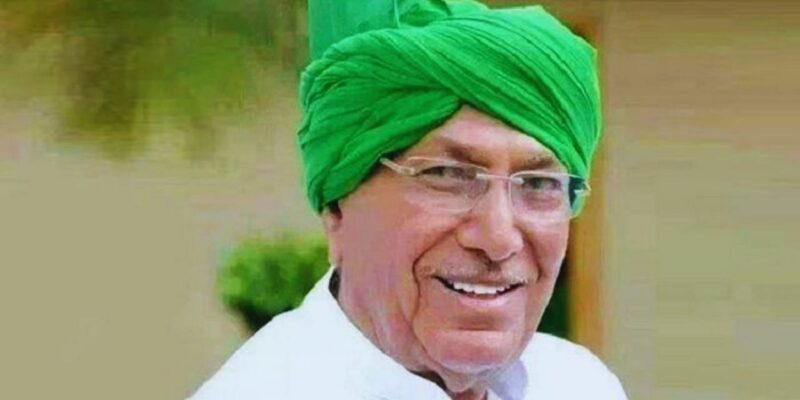 Omprakash Chautala is dreaming of coming to power again.

Omprakash Chautala is talking about mid-term elections in Haryana these days, even though the BJP-JJP coalition government is running without any deadlock in the state for the last two years.

An 86-year-old politician, who has recently come out of jail on corruption charges, starts playing with power in the same way as a child playing with toys. Now the rattle of power is not available in the market to be bought, so he thought of celebrating the birthday of his late father, who was once counted among the big leaders of the country, with pomp. A public meeting was organized, in which big leaders of the opposition were invited. But only three ‘big’ veteran leaders attended the meeting. Out of which the age of one was 93 years, the age of the other was 83 years and the age of the third was 75 years.

There was no such leader among them who could help fulfill the unfulfilled dream of that 83-year-old convicted leader in the future. This story is of Om Prakash Chautala, former Chief Minister of Haryana and those three elderly leaders were former Punjab Chief Minister Parkash Singh Badal, former Jammu and Kashmir Chief Minister Farooq Abdullah and former Union Minister Chaudhary Birender Singh.

16 years have passed since Chautala was sitting in the chief minister’s chair for the last time. Chautala was sent to jail for 10 years by the court in the teacher recruitment scam, but citing his age and disability, Chautala pleaded for premature release, which was accepted and he was released only recently, about a year and a half ago. Have become. But age and disability are not becoming a hindrance in dreaming. Legally he can no longer contest elections. He has applied to the Election Commission for permission to contest the elections and if the Election Commission does not agree, then he is planning to approach the court.

INLD is now struggling to save its existence

The problem is that after losing power in 2005, the people of Haryana, party leaders and workers started turning away from Chautala’s party Indian National Lok Dal. Chautala’s party is now struggling to survive. In the 2019 Haryana Assembly elections, the party could win only one seat. The party’s lone MLA and Chautala’s younger son Abhay Singh resigned from the assembly in January in support of the farmers’ movement. His thinking was that this would give strength to the INLD and the leaders of other parties would also have to leave the legislature, and he would become a big leader of the opposition. But the exact opposite happened. Eight months have passed and the Election Commission is not conducting the by-election from Ellenabad due to the Corona epidemic. Chautala believes that the ruling party is shying away from holding elections due to fear of defeat.

Father Chaudhary Devi Lal had been the Deputy Prime Minister in two governments of the country. The plan was that on his birthday there should be such an influx of politics that the distance between power and Chautala should be reduced. Chautala’s dream is that a third front should be formed in the country apart from the BJP and the Congress party so that his party can return. Invitations were sent to NCP leader Sharad Pawar, West Bengal Chief Minister Mamata Banerjee, Samajwadi Party founder Mulayam Singh Yadav and Rashtriya Lok Dal president Jayant Choudhary, but none of them came. How come even when all of them are trying to form a second front against the BJP in view of the 2024 Lok Sabha elections.

Parkash Singh Badal had to come. Chautala and Badal are turban-changing brothers. Badal is no longer active in politics. He has the right to retire at the age of 93. Farooq Abdullah is also leading a semi-retired life, though he is currently a Member of Parliament, and Chaudhary Birender Singh is now unemployed. After the 2014 Lok Sabha elections, he left the Congress party and joined the BJP. But later he had to leave the Union Minister and then Rajya Sabha membership because he wanted to pursue his son Brijendra Singh in politics. Brijendra is a Lok Sabha member but BJP did not make him a Union Minister, so Birendra Singh is angry with BJP. They are feeling that if Chautala’s plan becomes successful, then he will also return to politics, because Chautala is not averse to familyism like BJP.

Yes, Saturday’s public meeting, which was organized in Jind, was attended by Janata Dal (United) national general secretary K.C. Tyagi also joined, although the invitation was sent to JD(U) leader and Bihar Chief Minister Nitish Kumar. Nitish Kumar is the Chief Minister of Bihar these days due to the BJP, but he is not averse to riding on two boats together. Do you know that in future, with the help of small opposition parties, his dream of becoming the Prime Minister will come true?

These days, Chautala is talking about midterm elections in Haryana with a claim, even though the BJP-JJP coalition government is running without any deadlock in the state for the last two years. If Chautala thought that there would be a big public meeting in the name of Devi Lal and he would once again become a big leader of the old, then he was disappointed. The leaders of the public and other parties reached this meeting in small numbers.

Chautala is not one of those leaders who give up easily. He will keep dreaming and planning, with the hope that soon the slogan of ‘Abki Baar Chautala Sarkar’ will resonate in Haryana. In old age, while a part of his family is enjoying the pleasures of power by separating and forming the JJP party, Chautala has nothing else to do. The only thing that can be said about Chautala is that perhaps the proverb ‘the rope is burnt, but the cramping is left’ was made for him.