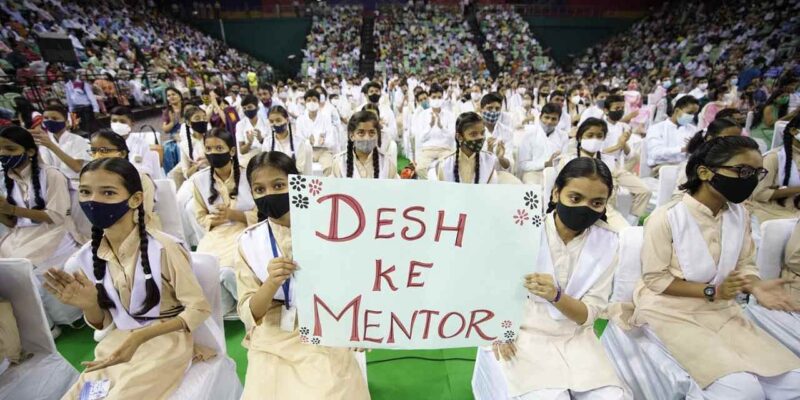 The ‘Desh Ka Mentor’ program has been started by the Education Department of Delhi to guide the students of government schools of Delhi.

The ‘Desh Ka Mentor Program’ program has been started by the Education Department of Delhi for the guidance of students in Delhi Government Schools. CM Arvind Kejriwal and Deputy CM Manish Sisodia started this program on Monday. The purpose of the ‘Desh Ka Mentor’ program is to provide career guidance to school children. This will help the children studying in government schools to find their mentor. Mentors will work to highlight their talents.

Through this program, eminent people of their respective fields will mentor the children from 9th to 12th standard. Actor Sonu Sood has been made the ambassador of this program by the Delhi Government. A mobile app has also been created for this. At the launch of ‘Desh Ka Mentor’ program, Delhi CM Kejriwal and Deputy CM Manish Sisodia said that under this program the students of Delhi government schools will be provided guidance on career options by successful people in their field. .

If our children get better guidance in school itself then they can win the world. The country’s mentor scheme has started in government schools of Delhi from today.

My appeal to all the youth, definitely connect with the children as a mentor, help them to lead towards a bright future. pic.twitter.com/pkJ3JQhtwe

‘Children will get better career guidance’

On the occasion of the launch, CM Kejriwal said that something big is happening in the field of education. He said that earlier 16 lakh children were studying in government schools. But now the number of children has reached 18 lakh 70 thousand. He told that 2 lakh 70 thousand children from private schools have come to study in government schools. He said that there is a lot of positivity in the education sector of Delhi. CM Kejriwal said that after 9th standard there is a lot of pressure on the child. The purpose of this program is to find such an elder brother or friend and sister of the children, with whom he can share everything.

CM Kejriwal said that people from every corner of the country will mentor the children. He said that some children are able to think only to a limit, if they get good mentors, then good avenues will be opened for their future. Along with this, he appealed to the youth and elders of the country to guide the children by connecting through the app. CM Kejriwal said that if a mentor prepares a child, it means that he is preparing the country. It can be downloaded through a missed call on 7500040004 to join the ‘Desh Ka Mentor’ app. Successful professionals in their respective fields will guide these children.

Also read-Delhi: Amidst the festive season and fear of terrorist attack, Delhi Police tightens security, mock drill is being done

How do you get property worth crores from the homes of government employees?