Dead bodies started appearing again on the banks of the Ganges, Phaphamau Ghat became a graveyard; Why is the situation in Corona under control? 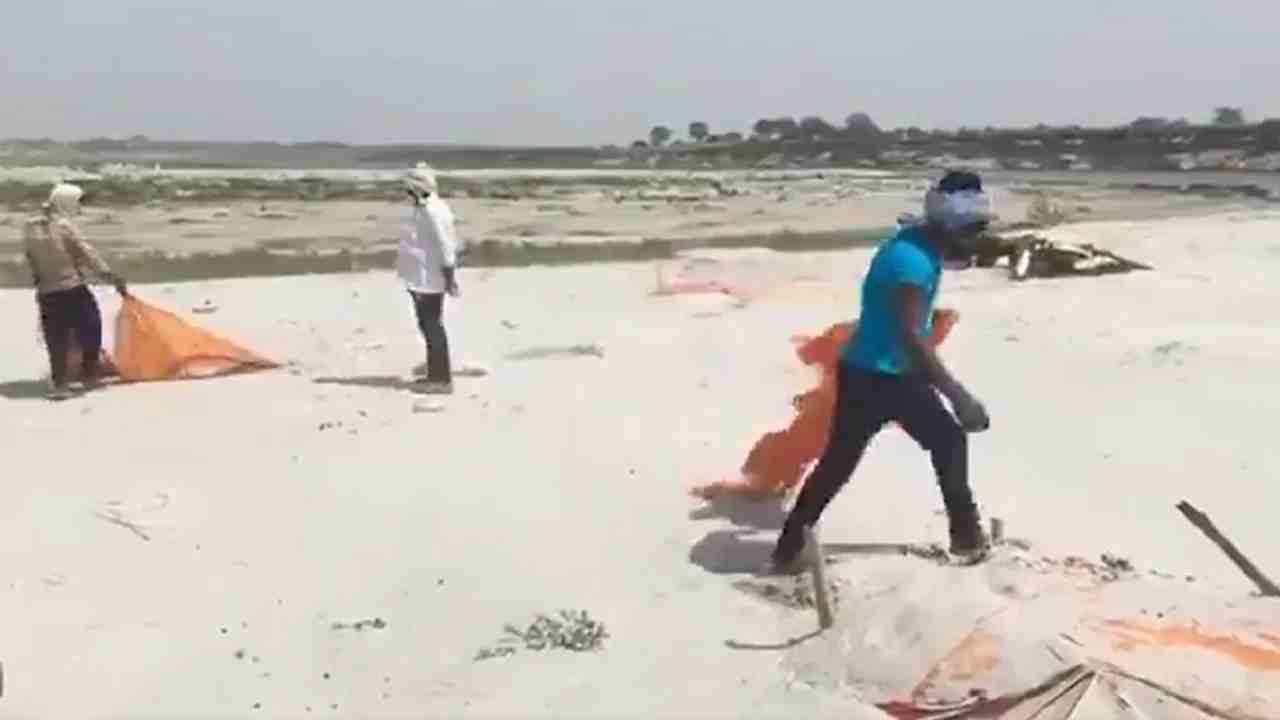 Sangam city Prayagraj (PrayagrajOnce again, cases of burial of dead bodies in large numbers in the sand on the banks of the Ganges are coming to the fore. Phaphamau ghat has become a kind of graveyard. The yellow and saffron colored cloth on the temporarily standing pillars indicate that the bodies have been buried. It is not a part of traditional Hindu religious practice, but people are taking recourse to it. Because they find it ‘convenient’, while some even call it a custom.

Last year, during a critical phase of the delta variant of COVID-19, the place got a bad name amid reports of bodies floating in the Ganga. Especially in the section of foreign media, it was shown that those who died of COVID-19 were buried or their bodies were ‘dumped’ in the Ganges. After which many restrictions were also imposed. But today when the situation of COVID-19 is under control, the practice of burying dead bodies is proving these reports wrong.

People come to the Ganges for the salvation of their loved ones and are burying the dead bodies. Some are calling it a custom and some are citing financial constraints. But despite the ban, the burial of dead bodies continues, as people say that the Ganges will take these dead bodies when it expands. At the same time, the international media has clearly linked it to COVID deaths without examining the reasons for open burial of dead bodies on the banks of the Ganges. It is worth noting that this year the international media has decided not to give information about open burial of dead bodies on the banks of the river. India has seen a decline in COVID-19 cases this year, with high vaccination coverage becoming a major factor in the country’s success in fighting the pandemic.

Teerthraj Patel said – there is nothing wrong in burying

There are bodies of people from many districts of Uttar Pradesh on the banks of the Ganges. Local resident Teerthraj Patel said that in Hinduism, funeral rites are performed by lighting a pyre, in which a lot of wood is used. Here the body gets absorbed in the Ganges. There’s nothing wrong with that. Attended the funeral of his relative at the ghat. He said that the ghat is used by people of different districts. They are aware of the contraction of the Ganges river during the summer season. They know that when the river will expand during the rainy season, the dead bodies will drown in the river and their loved ones will get salvation, hence are temporarily buried in the sand.

Another local resident present at the ghat said that the bodies would eventually go to the river Ganga. In summer, the width of the Ganges decreases. When the water level rises, the body will be absorbed in the flow of the Ganges and according to the beliefs, it helps in attaining salvation. Burying dead bodies in sand is simple and economical. Therefore, people from many districts come here to bury the dead bodies, leaving behind the traditional customs.

Electric crematorium will soon be built at the ghat

Meanwhile, Prayagraj Municipal Commissioner Ravi Ranjan said that soon an electric crematorium would be built at the ghat. We are urging people not to bury dead bodies there. An electric crematorium is to be built there, for which permission has been obtained from the concerned department. The work will be completed soon.

Events in UP and Bihar

Incidents occurred in Uttar Pradesh and Bihar, where bodies were found landing in the Ganges river during the second wave of COVID-19. Which was understood that the relatives of those who died due to COVID could not find a place or could not afford the funeral expenses. He handed it over to Ganga. However, the present scene presents a different reality.