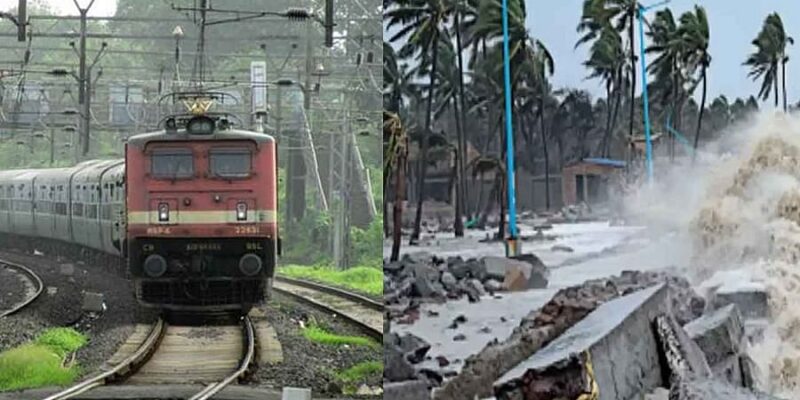 Cyclonic storm ‘Gulaab’ (Cyclone Gulab) in view of Jharkhand (JharkhandVigilance has been issued in all the districts. The effect of Cyclone Gulab, which is forming in the Bay of Bengal in almost all the districts of Jharkhand, will be seen till September 29 and 30. Meteorological Department alerted on Monday (AlertIssuing ) it has been told that during the last 24 hours, the condition of monsoon in the state will be weak. At the same time, 5.5 mm meter of record rainfall was received in Pakur. It can take the form of depression in the next 24 hours. Many trains have been canceled due to heavy rains.

The effect of cyclonic storm Gulab is also being seen on train operations. South-Eastern Railway has canceled many trains in view of the storm. Some routes have been changed. Railways has given information in this regard. Alert has been issued at stations adjoining Bengal and Odisha regarding the storm. 08571-Tatanagar Visakhapatnam Special train is canceled on 27th September. The timings of the Howrah-Secunderabad special train scheduled to leave on 26 September have been changed. It will open at 8:35 pm instead of 2 pm. The timing of 02245-Howrah Yesvantpur Special train has also been changed. This train will leave tonight at 10:50.

Since Monday morning, the wind is blowing at a speed of 8 kilometers per hour in Ranchi. Along with this, Ranchi is partly cloudy with 94 percent humidity. It is likely to turn into a cyclone in the next 24 hours. According to the Meteorological Department, it remained in the Bay of West Bengal. The effect of Cyclone Gulab will be seen in the entire state from Monday. In view of the cyclonic storm, many trains have been canceled, many have been changed in the route. Light to moderate rain will be recorded in the central districts of Jharkhand, east northern districts and southern districts. Along with this there is also a possibility of thunder and thunder with strong winds. At present, this low pressure area remains in the northeast in the Bay of Bengal. It is likely to move northwestwards. Along with this, it can also hit the coast of West Bengal on September 29. On the other hand, another pressure is building in the Bay of Bengal.

A low pressure area is forming in the Bay of Bengal

Jharkhand: ‘More than 2 lakh houses of Ranchi will be connected with free tap water connection’, announced by Hemant Soren government

Know how many bottles of wine you can keep at home? more illegal than