Woman to get Corona vaccine dose in Guwahati (Photo-PTI)

Amidst the fast growing cases of Corona virus in the country, now the central government will also collect data on people getting infected after taking the vaccine. There have been cases from many places in the country, where even after taking both doses of vaccine, people are becoming corona positive. To collect this data, some columns related to the vaccine have been added to the form to examine the corona virus sample. In which people will be asked information related to taking the vaccine.

According to the Health Ministry, along with giving their information in the sample form of Kovid-19 investigation, people will also have to tell whether they have taken the vaccine or not. If someone has taken the vaccine, they will also have to write the name of the company. Dose of two vaccines, Kovishield and Kovaxin, are currently being offered in the country. Also, people have to tell when they have taken the first dose and the second dose of the vaccine. Earlier, the Health Ministry had no way of finding out if anyone was getting positive after taking the vaccine.

Recently, 40 doctors including the Vice Chancellor of King George Medical University (KGMU) of Lucknow, Dr VK Puri, have been found corona infected. All of these doctors have had both doses of the vaccine. On Tuesday, Ashik Kumar Pandey, commissioner of Aurangabad Municipal Corporation in Maharashtra, was also found to be Corona positive. He took the second dose of the vaccine only last month. Apart from this, there have been cases of getting infected after taking the vaccine in many other places. 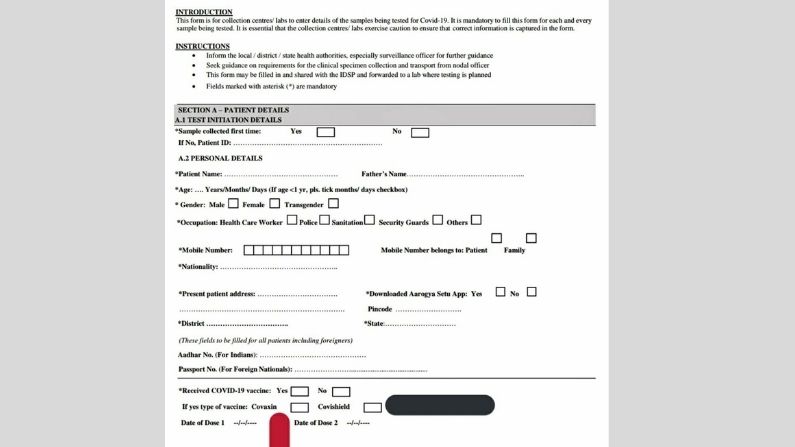 1,15,736 new cases of Corona were registered in the country

Central government’s response on vaccination for all

Amidst the demand by various states and groups to apply vaccine to all persons above the age of 18 years, the central government said that the goal of vaccination is to protect those at the most risk. Union Health Secretary Rajesh Bhushan said on Tuesday that vaccination campaign has been carried out in western countries in a phased manner. The Indian Medical Association (IMA) also wrote a letter to Prime Minister Narendra Modi suggesting that all people above 18 years of age should be allowed to take the vaccine.

Rajesh Bhushan said, “The basic goal is to reduce deaths through vaccination.” The second goal is to protect our health system. Who would work in hospitals if health workers, doctors, nurses, paramedical workers and other workers became ill? Therefore, the most important goal in any country is to secure the most vulnerable. The goal is to give vaccines to those who need more, not vaccination of those who want to take the vaccine. ”

read this also- Kovid vaccine has been tested on rats, rabbits and monkeys before humans, read full news

read this also- Which cities in the country have lockdown and night curfew, see the complete list here