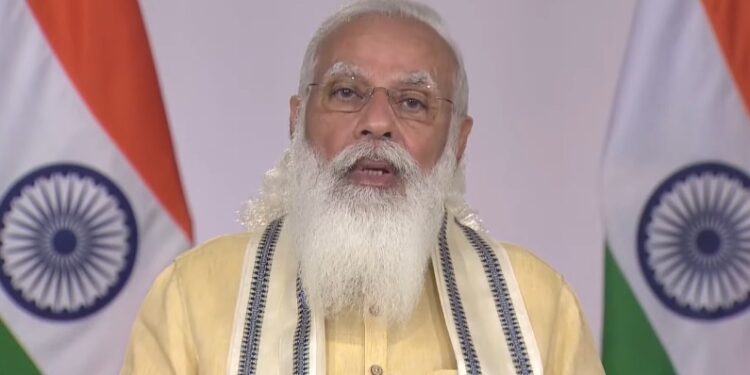 Opposition Congress on Monday reacted to Prime Minister Narendra Modi’s announcement of providing free vaccines to states to vaccinate all citizens, saying it was “too late but not fully recovered”.

Chief ministers of various states and the BJP welcomed Prime Minister Narendra Modi’s announcement to provide free COVID-19 vaccine to all citizens above the age of 18 years, but opposition parties claimed that the Center tried to save its credibility before the Supreme Court. Withdrew for this ‘flawed’ vaccine policy. BJP President JP Nadda said, “Whenever there is a crisis in the country, Modi has taken the lead.” Many party leaders also praised the Prime Minister’s move and said that it helped in the war against the epidemic. A new force has been blown.

Opposition Congress on Monday reacted to Prime Minister Narendra Modi’s announcement of providing free vaccines to states to vaccinate all citizens, saying it was “too late but not quite right” as the government’s demand for free immunization was rejected. Partially accepted. The party’s chief spokesperson Randeep Surjewala also alleged that the Prime Minister has insulted the elected governments and scientists of the past by making comments about the earlier vaccination programs in the country.

He told reporters, “Manmohan Singh, Sonia Gandhi and Rahul Gandhi have repeatedly demanded in the last several months that people above 18 years of age should get free vaccine, but the Modi government refused it. Then the Supreme Court put Modi ji and his government in the dock.” Former Congress President Rahul Gandhi tweeted, “One simple question: If vaccines are free for all then why should private hospitals charge money. ”

‘Thanks to PM for making immunization a national mission’

He tweeted, “The welfare of the people of India should have been given priority since the beginning of the pandemic. But unfortunately many lives were lost due to this late decision of the Prime Minister. Hope this time vaccination will be done with better management and the focus will be on the public and not on the people.” Patnaik said, “Every life is precious. No one is safe until everyone is vaccinated. Let us as a nation stand united in the fight against the COVID-19 pandemic. Thank you Prime Minister Shri Narendra Modi ji for making immunization a national mission.

Amarinder Singh on Monday said that the Centre’s decision to take over the procurement and distribution of COVID-19 vaccines will be helpful for the states which are facing difficulties in procuring the vaccines. Amarinder tweeted, “It is good that the Center has decided to take up the responsibility of procurement and distribution of vaccines for all age groups across the country. I have personally written to (Prime Minister) Narendra Modi ji twice, suggesting that this is the only way to deal with the COVID-19 vaccine crisis.

He said, “…This will also bring equity in pricing, which is much needed during the global pandemic. I am happy that Prime Minister Narendra Modi accepted our request.” The Bihar Chief Minister said that the decision of the Center is commendable and it will help in winning the ongoing war against the corona virus epidemic. Vijayan said, “The announcement of the Hon’ble Prime Minister to provide free COVID-19 vaccine to the states from June 21 is the biggest demand of this time. I am happy that the Prime Minister has got a positive response to our request.

We express our gratitude to the Supreme Court: Manish Sisodia

The Left, however, alleged that the prime minister has tried to “defend his suspected discriminatory vaccine” by blaming the states. CPI(M) general secretary Sitaram Yechury tweeted, “Now Modi has abandoned his policy fearing the Supreme Court’s direction on free and universal immunization. The Modi government should now honestly implement the free and universal vaccination program and should not make any excuses. A lot needs to be done. Many lives have to be saved.” Stalin welcomed the Centre’s decision to buy 75 per cent of the vaccines produced in the country and give them free of cost to the states. “I appreciate the Prime Minister for changing his previous stand,” he said.

Rajasthan Chief Minister Ashok Gehlot has described Prime Minister Narendra Modi’s announcement of making corona vaccination free for all as a victory of public sentiments. Delhi Deputy Chief Minister Manish Sisodia tweeted, “We thank the Hon’ble Supreme Court that after its intervention, vaccines will be made available for all age groups across the country. If the central government wanted, it could have done so long ago, but due to the policies of the center, neither the states could buy the vaccines nor the central government was giving them.

On June 2, the Supreme Court had questioned the Centre’s vaccination policy for the age group of 18-44 years and said it was “prima facie arbitrary and illogical”. The top court had asked the Center to review its vaccination policy. All India Majlis-e-Ittehadul Muslimeen (AIMIM) chief Asaduddin Owaisi tweeted, “Thank you PM for another unnecessary speech, which could have been conveyed through a press release. The change regarding the vaccine policy seems to be the result of the order of the High Court. However, the blame for the terrible vaccine policy was blamed on the states. Modi failed to ensure vaccine supply.”

Uttar Pradesh Chief Minister Yogi Adityanath said, “Many states were given the freedom to buy COVID vaccines for people aged 18-44, but many states found it difficult to do so. We are grateful that the Prime Minister resolved this issue.” Union Minister Smriti Irani said that this reflects the sensitivity and commitment of this government. Himachal Pradesh Chief Minister Jai Ram Thakur and Union Minister Anurag Thakur on Monday thanked Prime Minister Narendra Modi for announcing free corona virus vaccine to the states for immunization of all people above the age of 18 years.

read this also- Ram Madhav, who is writing a book on Deendayal Upadhyay, said – his ideas will have to be brought out of the office of Sangh and BJP