Corona Vaccine: After PM Modi’s announcement, how much money will have to be paid for Covaxin and Covishield in private hospitals? 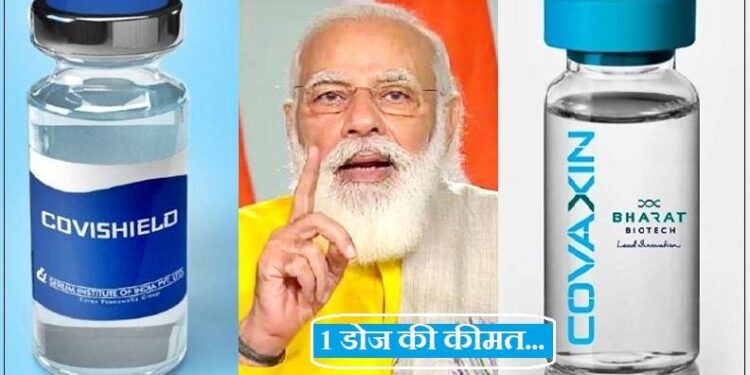 Corona Vaccine Rates in Private Hospitals: During his address, PM Modi has said that private hospitals should not charge more than Rs 150 for service charge, it will be the responsibility of the state governments to monitor it.

Prime Minister Narendra Modi made a big announcement at 5 pm on Monday regarding Corona Vaccination. He said that even for people between 18 and 44 years of age, the cost of vaccine will be borne by the central government. That is, states will no longer have to buy vaccines from companies. The central government will buy 75 percent of the vaccine from companies and provide it to the state governments, as was the system for people of 45 years of age and above. This system will be applicable from June 21. For the remaining 25 percent of the vaccine, the system will continue to be sold by companies to private hospitals or other firms.

This time PM Modi has said that private hospitals should not charge more than Rs 150 for service charge, it will be the responsibility of the state governments to monitor it. Now coming to the main question that if you get the vaccine done in a private hospital then how much money will you have to pay? For this it is important to know how much the vaccine cost has been kept for private.

There are generally 2 vaccines available in the country, Covishield and Covaxin. According to the report of New Indian Express, the Pune-based company Serum Institute of India, which makes Covishield, has fixed the price of a dose of the vaccine for private hospitals at Rs 600. (This price is Rs 150 for the central and state governments respectively. And 300 is Rs.) In such a case, private hospitals will be able to charge 600 + 150 i.e. 750 rupees for a dose of Covishield.

At the same time, Hyderabad Best Company Bharat Biotech has fixed the price of one dose of Covaxin at Rs 1200 for private hospitals. That is, if you take one dose in a private hospital, then you will have to pay 1200 + 150 i.e. Rs 1350. Earlier in these hospitals, Rs 1200 to Rs 2300 were charged for the vaccine. Now after the announcement of PM Modi, common people will get big relief.