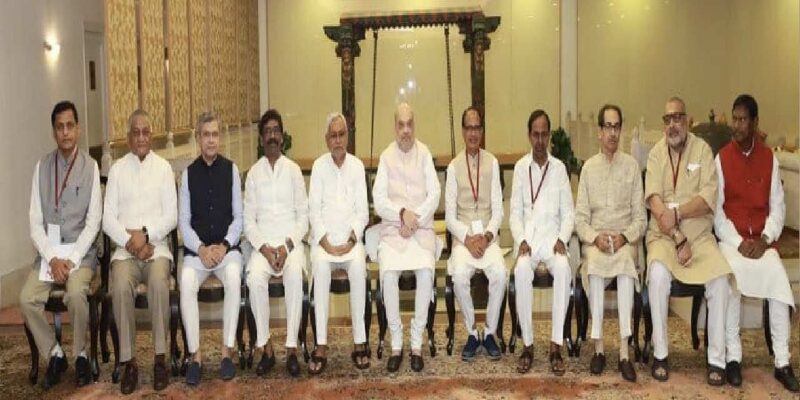 Jharkhand Chief Minister Hemant Soren attended the high level organized on “Left Wing Extremism” at Vigyan Bhawan in New Delhi. Home Minister Amit Shah presided over the meeting. During the meeting, Hemant Soren told that in the year 2016, there were 195 militant incidents in Jharkhand. This number has come down to 125 in the year 2020. In the year 2016, 61 civilians were killed by the militants, in the year 2020 this number was 28. A total of 715 militant arrests were made during this period. In the said period, 18 militants were killed in police encounters.

The Chief Minister said that effective action is being taken against the militant organizations in Jharkhand. As a result of these operations, the presence of militants in the state has been mainly limited to Parasnath Pahar, Budha Pahar, Seraikela, Khunti, Chaibasa, Kolhan area and some areas of Bihar border. The day is not far when Left Wing Extremism can be wiped out from these places too.

Efforts are being made to bring Naxalites into the mainstream

The Chief Minister informed that till the year 2020 and August 2021, 27 militants have also surrendered. The state’s attractive surrender policy is also being promoted. Efforts are being made to bring the misguided youth back into the mainstream through community policing. The state government is coming up with ‘Sahay’ scheme for youth in Naxal-affected areas, under which youth and other people will be connected in these areas through various sports.

It is not right to demand money from the state government

The Chief Minister said that the problem of militancy is a big challenge for both the Central and the State Government. In such a situation, it does not seem practical to demand money from the State Governments by the Government of India in lieu of deputation to the Central Security Forces. In this item, a bill of Rs 10 thousand crore has been given by the Ministry of Home Affairs against Jharkhand. I would request that while rejecting these bills, the decision of not sending such bills to the state governments in future should be taken by the Government of India.

Plans of Naxal affected areas should not be stopped

The Chief Minister said that many schemes have been implemented by the Government of India from time to time for the eradication of extremism. These schemes have also given special benefits, but it has been seen that for some districts, these schemes were suddenly stopped, which hurts the efforts being made towards eradication of extremism. The sudden closure of these schemes can give an opportunity to the extremism to spread again. In this context, an amount of Rs 33 crore per district is provided by the Government of India under special central assistance. Initially this scheme was approved for 16 districts, but this year this scheme has been continued for only 08 districts. Similarly, Koderma, Ramgarh and Simdega have been excluded from the SRE scheme.

The Chief Minister said that MGNREGA is an effective measure in improving the condition of Naxal-affected areas. MNREGA is progressing very strongly in Jharkhand. But, the wage rate that the workers of Jharkhand are getting is the lowest in the country. In other states it is getting more than Rs.300/day, but in Jharkhand Rs.200/day. also no.

Increase the number of schools for education

The Chief Minister said that 192 Eklavya schools have been sanctioned in the state. Out of these, 82 will be established in militancy-affected districts, I would request that the condition of 50% in the prescribed criteria for the approval of Eklavya school should be abolished, so that tribal-dominated rural areas can get the benefit of this scheme. There are 261 blocks in Jharkhand, but in only 203 blocks, Kasturba Vidyalaya has been constructed with the help of the Central Government.

Discussion of natural farming of Himachal Pradesh happening all over the world, foreigners coming to get information