China’s big conspiracy exposed, in a month and a half, people were duped of 250 crores by cyber fraud, 11 accused arrested 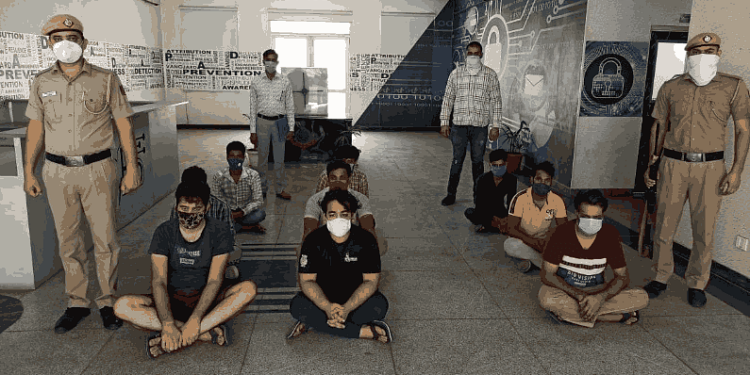 In the lockdown when people were losing their jobs and were sitting in their homes. Then a ray of hope appeared. They felt that now they can earn money even sitting at home. But they did not know that this greed is part of a bigger conspiracy. Which has been created by the enemy sitting outside the border of the country. The Cyber ​​Cell of Delhi Police has busted a gang of thugs who have duped lakhs of people by sitting outside the country in China. In just one and a half months, these tricksters of China robbed the hard earned money of 5 lakh people and the loot was not a small amount of 250 crores.

The Cyber ​​Cell of Delhi Police has busted a new network of frauds by arresting 11 people. Actually, at this time online fraud has increased very fast in the country. That is why the cyber cell has also become very active. Earlier this year, the police took action on two Chinese applications. However, shortly after this, the police got information that there are some more Chinese apps which have become active again and from which the data of the people of the country is also being stolen on a large scale along with cheating.

In the second week of May, the police came to know that there are apps named ‘Power Bank’, ‘Sun Factory’ and ‘Easy Plan’ which are downloading very fast and stealing people’s data and sending them abroad. After this, these apps were immediately analyzed in the forensic lab, which revealed that these apps are being operated from China and people were being lured to earn money by investing money from them.

Raids at many places in Bengal and Delhi NCR

After this, the police saw that even though their servers are in China, some people are sitting here and playing all these games. After which the police also raided many places in West Bengal and Delhi NCR. Police from West Bengal nabbed a person named Robin Ali who was handling 30 accounts alone. After that 10 of his other accomplices were caught, in which each had a different role.

Robin told the police that they were luring people to earn money in the name of technology through these apps. Once a person joined this app, he was lured to make him odd members. So that more and more people can join. Any person could join it by paying just Rs 300. But many people have also invested lakhs in it. After joining, they used to get a refund of 10%. After which people come in greed and start putting more and more money. However, the biggest thing is that this money was visible only in the mobile application and not in the account.

After this, this money was transferred through cryptocurrency to the account of Shell Companies. These shell companies and accounts were also created in a fake manner. In which the help of Chartered Accountant helped. Police have also arrested 2 Chartered Accountants (CA). The masterminds of this whole plan sitting in China used to find those who run the business of fraud for themselves through Telegram and YouTube.

Police believe that so far about 50 lakh people have downloaded these apps. Out of which only 5 lakh people have been traced so far. So far, in the investigation, the police have found a robbery of 150 crores, but it is feared that this figure can go up to 250 crores. Police have recovered Rs 97 lakh. Police say that for getting these thugs sitting in China, the proper channel will be approached through it.

The post Expose China’s big conspiracy, defrauded people of 250 crores by cyber fraud in one and a half months, 11 accused arrested appeared first on NewsNCR Hindi.