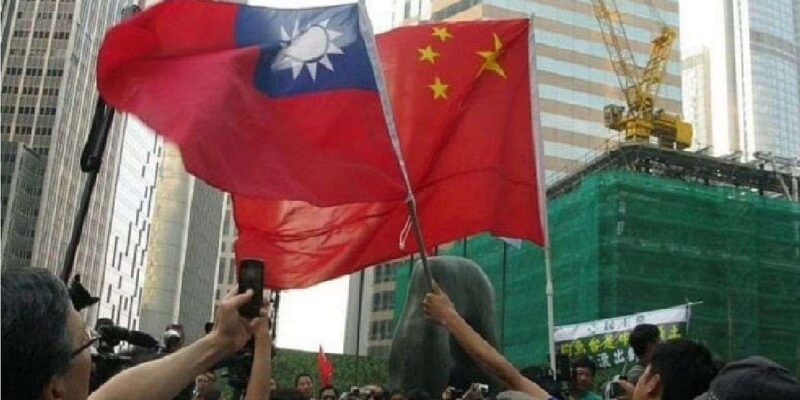 flag of taiwan and china

Looks like ‘Cold War’ is knocking. Are China-Taiwan tensions the beginning of a ‘cold war’ between the US and China? Will this ‘war’ between the US and China be confined to tensions or will this tension turn into a devastating war of modern weapons? There is an atmosphere of concern in Taiwan due to China’s provocation. The provocations are so intense that Taiwan can lose patience at any time, and that is what China wants. According to some experts, China is increasing pressure on Taiwan over its deteriorating home politics, arms trade and efforts to control the semiconductor industry.

Taiwan is smaller than the state of Kerala in size. Population is less than Haryana state and not even equal to two percent of China. Last week, China flew nearly 150 warplanes near Taipei in four days to intimidate Taiwan. Surprisingly, there was also an H-6 aircraft carrying nuclear bombs in this fleet. There was also an aircraft in this fleet that had the ability to jam the signal of Taiwan’s air defense system. The world is shocked by this bigotry of China. In the past, such operations were mainly carried out by intelligence aircraft, but surprisingly more and more Chinese aircraft equipped with modern combat equipment are now participating in this exercise, which is worrying.

Taiwan has considered itself an independent country for 72 years. The original plots of the two countries are far and away from each other. Beijing’s rulers see Taiwan as their region of rebellion. However, even after passing so many years, Taiwan has not officially declared its independence. But Taiwan has a separate constitution, a democratically elected government and its own armed force. Fighter jets of the Chinese Air Force are constantly passing near Taiwan’s air defense area and are engaged in intimidation. China’s show of power in this area is aimed at preventing Taiwan from becoming ‘independent’. For this, Beijing does not back down even to scare its own people with atomic bombs.

Chinese President Xi Jinping insisted last week that Taiwan should “join” the mainland. In his speech, he also said that ‘China has a proud tradition of repressing separatism.’ Tensions between Taiwan and China are high during Xi Jinping’s reign. Due to domestic politics, Xi Jinping is now trying to build a strong image among the nationalist Chinese by making Taiwan an issue. Anti-Taiwan aggression has become an important political compulsion for the Chinese rulers at this time.

Many commentators consider Jinping to be psychologically pressured to vote for the pro-China Kuomintang (Guomintang) party through persistent threats to Taiwan. If the Kuomintang Party does well in the election, then China will not need to spend money on the issue of Taiwan. But the 110-year-old pro-China party is no longer liked by the Taiwanese youth, therefore not able to compete with the ruling Democratic Progressive Party in Taiwan, and this has become a headache for Xi Jinping.

Taiwan an essential resource for the world in the semiconductor industry

Since the Communist Revolution on China of 1949, there has been a political opposition among Beijing Taiwanese. Now despite being a communist nation, capitalism is moving in vigorous steps with power in China. But Taiwan no longer wants to join mainland China. The development of Taiwan’s industrial talent has become an attractive and violent subject for China today. Taiwan is an essential force in the semiconductor industry for the world. They have a complete technology chain for manufacturing integrated circuits out of silicon, which accounts for a large portion of global human resources.

Most of the technology war between Washington and Beijing over the years has been over semiconductors. Of great concern to China is the involvement of South Korea, Japan, and especially Taiwan, along with the United States, in the semiconductor sector. Semiconductor is indispensable in the field of technology. Semiconductor diamonds are more valuable than gems. With a prosperous island like Taiwan coming together, China could continue to dominate the global ‘chip-war’. The ‘chip-war’ involves South Korea, Japan and especially Taiwan on the side of the United States in this fight against China. The four armies are anti-China.

Semiconductor may be one of the main reasons behind China’s provocative talk about Taiwan unification. If China is able to take Taiwan with it by intimidation, then it will be a big victory for China. If the war breaks out and China wins, China will benefit from Taiwan’s semiconductor industry, and if the war also damages the semiconductor sector, it will still have China’s advantage in the competitive market.

The world’s armament industry booms due to China-Taiwan tension, which will benefit America

Taiwan’s leaders say that it will not be surprising if a sudden shelling starts due to tensions with China. President Xi Jinping has always talked about the right to self-defense. They do not feel that there is any need to declare the independence of their country. Taiwan’s President Tsai Ing Wen said, ‘We will continue to enhance our national security and demonstrate our commitment to defend our own security so that no one can force Taiwan to follow the path made by China.’

According to Taiwan’s Defense Minister Chiu Kuo-cheng, China will definitely take military action on Taiwan by 2025, despite not declaring independence. To deal with that situation, he has prepared a special defense budget of $ 9 billion in the country. The current government of Taiwan wants to start the initiative of manufacturing missiles on a large scale. Leaders such as Chiu Kuo-cheng speculate that the deployment of missiles on a large scale could protect themselves against Chinese warplanes. Due to China-Taiwan tensions, the world’s ordnance industry is witnessing a boom, especially the United States will get the biggest benefit from it.

For Taiwan, will the United States collide with superpower China?

Washington is regularly selling weapons to Taipei. Informally, it has huge bilateral trade with Taiwan. US presidents have often verbally pledged to stand together to defend Taiwan. Congress also passed a law called the ‘Taiwan Relations Act’ in 1979 that would help the US in the defense of Taiwan. It is reported that some American soldiers are also present in Taiwan as trainers. Trade in arms is becoming more and more profitable for America in the midst of a hostile environment.

But after the withdrawal of US troops from Afghanistan, Taiwan should reconsider how much it trusts Washington. But it is also true that, to stand firmly against Beijing, Taiwan needs the full support of a power like the United States. But this aggressive exercise of China is very beneficial for America. The more Beijing is threatening, the more Taiwan’s dependence on American weapons is increasing. Last year, the two countries traded weapons worth about $20 million.

Taiwan is a prosperous country with the 20th largest economy in the world. Now most of Taiwan’s resources are being spent on the military. As tensions in the region increase, so will military expenditure in Vietnam, the Philippines, South Korea and Japan. This is very encouraging for America. In many ways, the US military industry has directly benefited from China-Taiwan tensions. But how far would it be okay to trust Washington in the Taiwan-China conflict. For Taiwan, will the United States collide with superpower China?

Taiwan’s President Tsai Ying-wen has always opposed China. The people of Taiwan are terrorized by China because of the way China has suppressed the democratic movement in Hong Kong. The Hong Kong incident has proved that Xi Jinping can cross all limits of cruelty in the interest of his country and he does not even care about the world fraternity.

It is a well-known fact that Washington has failed to protect Hong Kong’s democratic movement from Chinese repression, despite showing sympathy in many ways. A section of Taiwan’s youth thinks that Xi Jinping wants to take himself to a special height in history by inducting Diwan into mainland China. Jinping wants to do what Mao Zedong or Deng Xiaoping could not do. At present, China’s military technology and resources are far greater than those of Mao and Deng.

Hanoi, Manila, Seoul, Tokyo and the surrounding areas all have anecdotal evidence that China is an aggressive power. After such an invasion, guerrilla resistance is being built with the cooperation of Washington throughout Taiwan.

The tension of rail passengers of Uttar Pradesh, Bihar and Madhya Pradesh is over, Railways will run festival special train