By June 15, the central government will distribute 300 crore pulses and oilseeds seeds to 13.51 lakh farmers. 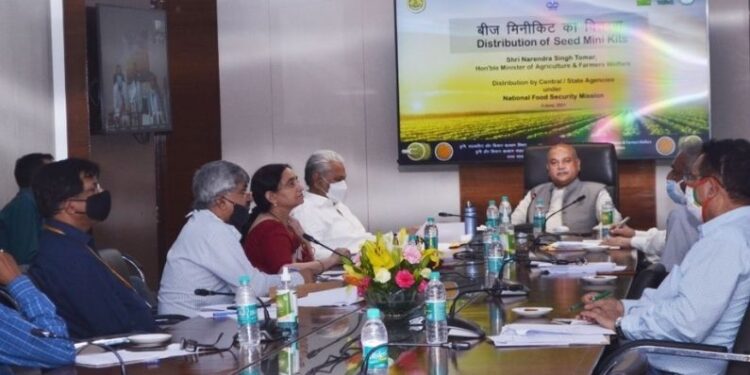 To achieve self-reliance in the field of pulses and oilseeds, the central government will distribute seeds free of cost to 13.51 lakh farmers by spending Rs 300 crore on June 15. These seeds will be of improved quality.

To achieve self-reliance in the field of pulses and oilseeds, the central government will distribute seeds free of cost to 13.51 lakh farmers by spending Rs 300 crore on June 15. These seeds will be of improved quality. Agriculture Minister Narendra Singh Tomar said on Wednesday that this work is being done to mark the completion of two years of the second term of Prime Minister Narendra Modi.

Union Minister Tomar said that in order to make the country self-reliant in this regard by increasing the production of pulses and oilseeds, the Center has prepared a roadmap after consultation with the state governments. There will definitely be a lot of benefit going forward on this and being self-reliant in them will also save a lot of money spent on imports, which can be used in other developmental works in the country. Areas have been identified to increase acreage and the barrier of new varieties has also been overcome.

Tomar said that instead of wheat and paddy cultivation, crop diversification towards pulses and oilseeds is the need of the hour. For this, strong resolve of the states is needed. If the state governments decide to take the knowledge of Krishi Vigyan Kendras (KVKs) to the doorstep of every farmer, then we can make a radical change in the near future. Tomar expressed hope that the resolution taken by the Center and the states, we will surely succeed in this together with the enthusiastic and hardworking farmers.

The Agriculture Minister said that the strength of our farmers should remain like this, who have the capacity to keep the country standing on their shoulders even in adverse circumstances. Agriculture and rural economy is a very big force in our country, if it continues to grow, surely no one can stop the foundation of the country from getting stronger. That is why, the Prime Minister also constantly emphasizes on bringing changes in the conditions of the village-poor-farmer. These have also been emphasized in the call of the PM of self-reliant India.

He said that working with agriculture is a great service to the country. Today, the combined result of farmer’s hard work, scientific research and government’s friendly policies of agriculture is that India is at number one or second place in the world in terms of agricultural production, but we need to increase exports further. It is necessary to have holistic, balanced and far-reaching thoughts about the development of agriculture. It is also necessary to maintain and increase the interest and acreage towards agriculture in the country. Schemes have been started by the Prime Minister in this direction and all measures are being taken to fill the gaps. A new world of FPOs is being created to increase the power of the poor and small farmers. Many such continuous schemes are coming to fruition.

Also read- Macadamia Nuts: World’s most expensive almond, what is its specialty and why is it sold at such a high price?