BSF insulted in the assembly, Shubhendu officer reached BSF camp with sweets and flowers, apologized on behalf of TMC 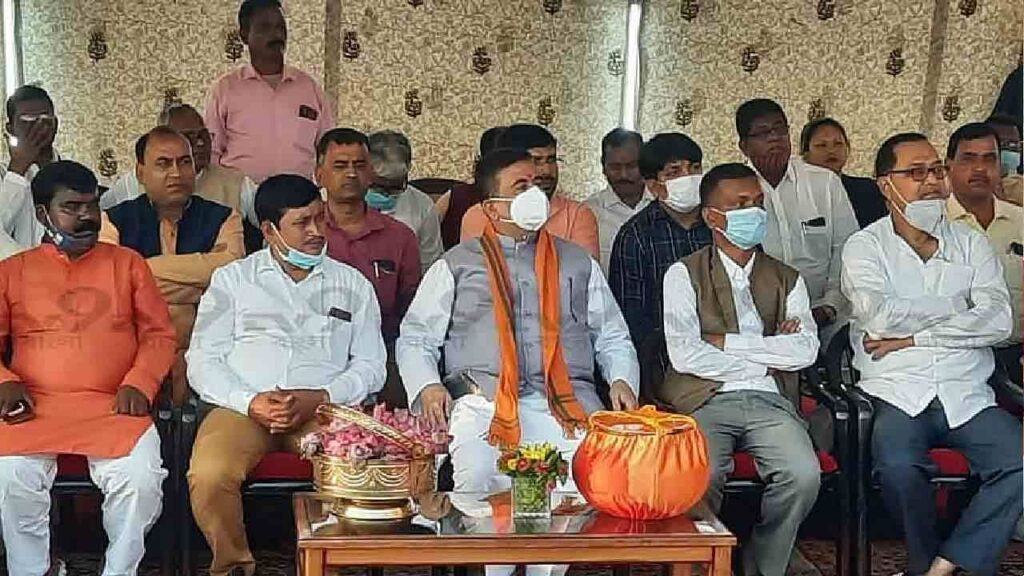 BSF’s right on the border (BSF JurisdictionsPolitics is going on in Bengal to increase the area. BSF in the assembly (BSFLeader of the Opposition in the Assembly Shubhendu Adhikari (Shubhendu Adhikari) on Thursday following the passage of a resolution against the jurisdiction of TMC MLA Udayan Guha.Suvendu Adhikari) Arrived at the BSF camp in Newtown and welcomed the BSF jawans by handing them pots full of lotus flowers and sweets and apologized on behalf of the TMC MLA.

In the afternoon, Shubhendu Adhikari went to the South Bengal Frontier office with more than 60 MLAs at the BSF’s South Bengal Frontier headquarters in New Town. He supported giving rights to the BSF on the border. He said, “Some abusive words have been used about BSF in the assembly. I think it was a disgrace. That’s why I have come to apologize.”

BSF was disrespected in the assembly, we apologize

“Some TMC MLAs used abusive languages for BSF in the Assembly. So we’ve come here to apologize to BSF officers & thank them for national service,” Adhikari says pic.twitter.com/vCONsu6fjy

According to BJP, the main purpose of this program is to honor the BSF jawans. Congratulations, as they fight tough situations in the border areas, they are trying to save the country, but some people have questioned their role. Shubhendu Adhikari said, “You have sacrificed yourself for the security of the country. Our agenda is very clear. The Government of India has issued that circular. The strength of BSF has been increased. This is good news for Bengal, but a resolution was passed on this issue in the assembly. Disrespected by many. That’s why we have come to apologize to you. BSF is working beyond country and religion.” On this occasion, Shubhendu Adhikari requested the BSF officers to establish Gaushalas in the border areas. Shubhendu argued, “Gomata is harassed a lot at the border.”

BSF jawans are working for the country

However, Shubhendu Adhikari, standing at the BSF office, claimed, “We have not come as a political party. I have come as MLA. I have come today to give you the good news that the area has increased. This time all illegal activities will be banned. Some abusive words have been used in the assembly regarding BSF. I think it was a disgrace. That’s why I have come to apologize.”

April 2012.
Gujrat CM Narendra Modi wrote a letter to PM Manmohan Sing opposing the proposal of central Govt related to expansion of BSF power. Modi said that was attack on federal system and state rights.
Now, today BJP has to explain about their stand on that letter.
Waiting.

Meanwhile, TMC spokesperson Kunal Ghosh took a jibe at the program and wrote on Twitter, “Shubhendu is going to BSF camp and doing lousy drama. Why did Gujarat Chief Minister Modi send a letter to the then Prime Minister Manmohan Singh in 2012 against BSF coming to power? Why did Modiji say that it affected the federal structure? Let BJP stop the drama without answering.”

West Bengal Triple Death: The death of an 8-year-old child including husband and wife in Cooch Behar caused a stir, hands were tied with headphones