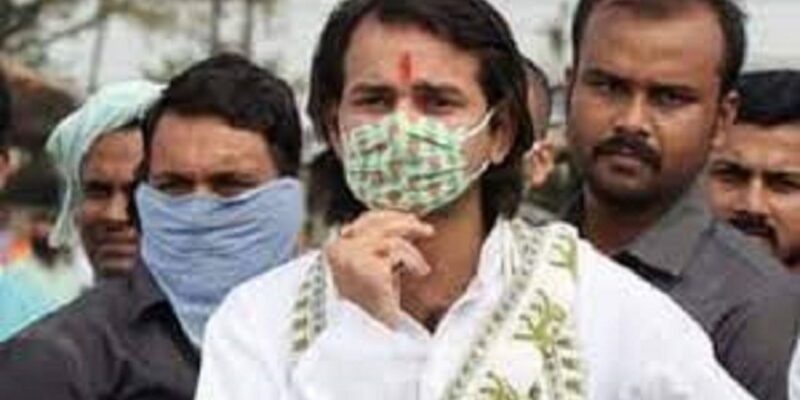 Lalu Prasad’s elder Lal Tej Pratap (TEJPRATAP) has become a rebel. He has come down on such a revolt that now he is fielding candidates against his own party (RJD). It is reported that Tej Pratap Yadav’s organization Chhatra Janshakti Parishad candidate is entering the electoral fray in Tarapur. It is being told that preparations are on to make Sanjay Kumar, president of Munger Division of Chhatra Janshakti Parishad, from Tarapur seat as an independent.

Sanjay is a Russian returnee, he has studied mechanical engineering there and has also worked there for 15 years. The news of Sanjay contesting the election got a boost when Prashant Pratap Yadav, state president of Chhatra Janshakti Parishad told that ‘Sanjay Kumar will fight as an independent from Tarapur and the council will help him. Sanjay Kumar belongs to the Yadav caste. Tarapur is a Kushwaha dominated area. Here Yadav voters are at number two. Tej Pratap’s future candidate Sanjay Kumar is also a Yadav, he has contested here twice before. If Tej Pratap gets the vote of Muslim and other caste then a new equation can be formed.

Discussion about going to Congress

Here Tej Pratap’s going with Congress is also being discussed. Tej Pratap met Congress leader Ashok Ram on Thursday. Ashok Ram is the Congress candidate from Kusheshwar Sthan seat. Tej Pratap’s close aide Saurabh Sharma has confirmed this meeting and said that it was a formal meeting. He said that Tej Pratap was in RJD, and will remain in RJD. On the other hand, Saurabh has denied Sanjay Kumar contesting the election and said that the Chhatra Janshakti Parishad is an organization and not a political party. He said that Tej Pratap Yadav and Chhatra Janshakti Parishad are completely with the RJD candidate.

Here along with Tej Pratap’s displeasure, the news of another RJD leader’s displeasure is coming to the fore. It is being told that Jai Prakash Yadav, former MP of Banka and Munger, is also angry with the party. After Jai Prakash Yadav’s daughter Divya Prakash was not given ticket from Tarapur, it is reported that she is in touch with Congress. Divya Prakash was the youngest candidate in the 2020 assembly elections. During the election, Divya’s speech was in the news a lot. Divya gave a tough fight to Mevalal Chaudhary here and lost the election by just five thousand votes.

The month of September was weak for the auto sector, 5 percent fall in retail sales

IPL 2021: Deepak Chahar proposed to girlfriend wearing a ring after the match, the couple hugged while laughing, watch video