Bihar: A loud explosion took place and the madrasa collapsed, fear of explosion, bomb squad on the spot 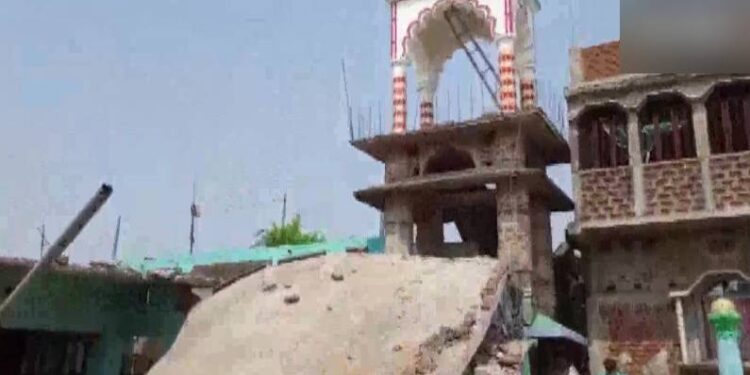 Madrasa collapsed after an explosion in Bihar.

A madrasa collapsed in Bihar’s Banka district with a loud bang. It is being told that there was an explosion with a loud sound. The explosion was so strong that the adjoining building was also damaged. Thankfully no one died in this accident. No arrest has been made so far, but an inquiry has been ordered into the matter. Due to this incident, there is a situation of tension in the surrounding area.

The blast took place at eight in the morning inside a room of Navtolia Madrasa building under Town police station area. Police said that prima facie it appears that the explosion was caused by gelatin. More than ten people were present in the madrasa at the time of the blast. The room where the blast took place was locked for several days. The blast was heard far and wide.

Glasses of nearby houses were broken

Police say the blast took place in a room on the ground floor. This caused cracks in the walls and ceiling of the madrasa. The room where the blast took place collapsed after some time. At the same time, the glasses of the nearby houses were broken. Besides Banka Police, Bomb Squad, Dog Squad and Anti-Terrorist Squad (ATS) visited the spot.

Police said that they have not denied any theory. The blast may have happened from outside the madrasa. It could also be that it happened due to LPG cylinder. But it is believed that explosive material was kept inside the room, due to which the explosion took place.

“Madarasa wasn’t functional due to lockdown. We’re waiting for FSL team & bomb squad to arrive at spot. There is no evidence of any injured person at moment. Cause of blast is yet to be ascertained,” says Arvind Gupta, SP Banka pic.twitter.com/Xwo1nmjJV5

Banka SP Arvind Kumar Gupta visited the spot and said that a forensic team has taken samples from the site, report is awaited. A case of criminal conspiracy, negligence in relation to explosive substance has been registered against unknown persons under different sections of the Indian Penal Code (IPC) and Section-5 of the Explosives Act. The Home Department of Bihar has ordered a thorough investigation into the incident.

Also read- Jaipur: The girl was returning from the party late at night during the lockdown, gang raped by the miscreants in the car on the pretext of giving a lift

Also read- Rajasthan: Nani and granddaughter set out on foot for home in lockdown, girl died due to lack of water on the way