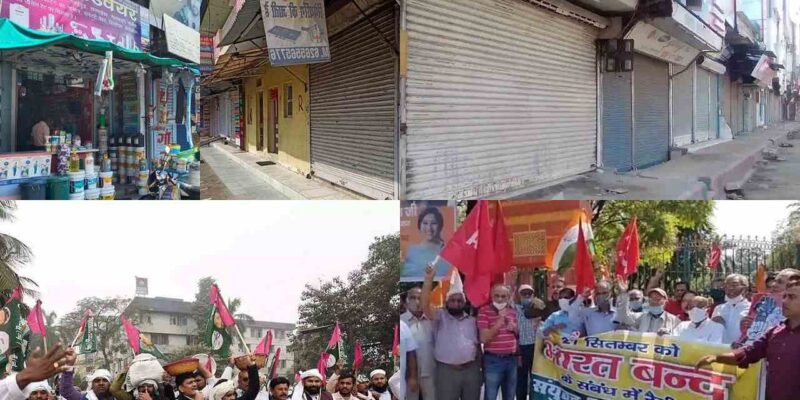 The Bharat Bandh called by the United Kisan Morcha is over now. The bandh that started at 6 am lasted for about 10 hours.

The ‘Bharat Band’ called by the United Kisan Morcha is over now. The bandh that started at 6 am lasted for about 10 hours. Farmers say that the bandh has been successful in many states of the country including Punjab, Haryana. But if Uttarakhand and Madhya Pradesh (Uttarakhand-Madhya Pradesh BandIf we talk about it, then the mixed effect of the bandh was seen here. A lot of impact of the bandh was seen in Uttarakhand. So the situation remained normal in many districts in Madhya Pradesh. Farmers, trade board officials and Congress workers took out a protest procession early in the morning in Rudrapur in Udham Singh Nagar district of Uttarakhand.

Not only this, farmer leader Saheb Singh Sekho threatened self-immolation if his demands were not accepted. In view of such a situation, a large number of police forces were deployed. The movement of farmers was disrupted during the Farmer’s Bharat Band. The protesters surrounded the vehicle of Minority Minister Yashpal Arya. He was stuck in the jam for a long time. Vehicles were also stopped on Bajpur highway. At the same time, a tractor-trolley was parked on the Rudrapur highway and the road was blocked.

Most of the shops remained closed in Kashipur

The effect of Bharat Bandh was seen in Kashipur since morning. Most of the shops in the market remained closed. At the same time, in Haldwani, all shops were kept closed except for essential goods. During this, members of the All India Kisan Mahasabha staged a sit-in demonstration in Buddha Park. At the same time, a procession was taken out in support of the bandh in Haridwar. However, the effect of the bandh was not seen much in the markets.

In view of the Bharat Bandh, heavy police force was deployed at the intersections. No significant effect of Bharat Bandh was seen in Jabalpur too. The entire market was opened early in the morning. Even after showing mixed effect of bandh
Bharatiya Kisan Sangh leader Rakesh Tikait said that the ‘Bharat Bandh’ of farmer organizations was successful.

He also said that we are ready for talks with the government but no talks are taking place. The United Kisan Morcha (SKM), a group of more than 40 farmer organizations agitating on the borders of Delhi for the last 10 months against the three agricultural laws of the Center, had organized a Bharat Bandh. During this nationwide bandh, traffic, business activities and other services were disrupted across the country from 6 am to 4 pm.

IRCTC Package: Visit famous temples of South India in November, this special train will run from Indore in Madhya Pradesh

This woman once wanted to commit suicide due to an illness, now she is a famous model