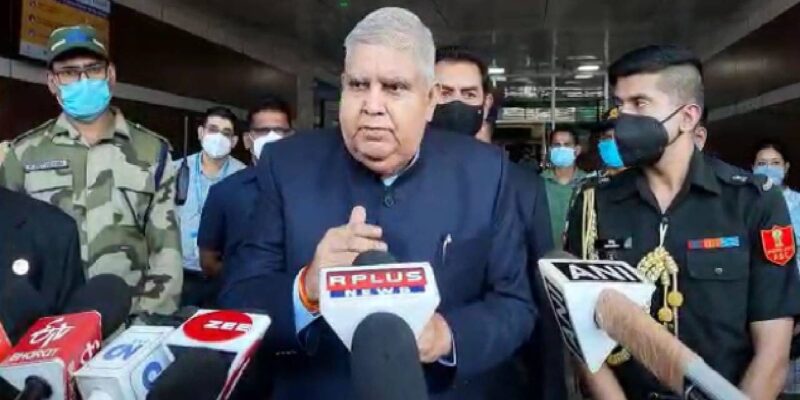 Photo: Governor Jagdeep Dhankhar, who arrived in Darjeeling on a two-week leave, interacting with the media.

West Bengal Governor Jagdeep Dhankhar ( West Bengal Governor Jagdeep Dhankhar) again the Mamata Banerjee government of West Bengal (Mamata Banerjee Government) attacked. Along with this the state’s IAS (IAS) and IPS (IPSTargeting the officers also, he said that there is neither any accountability nor transparency in the top officials towards the Constitution. He is not a public servant, but a political servant. The Governor has reached Darjeeling on Tuesday on a two-week leave. At the same time, while talking to the media, he said these things.

Apart from congratulating Mahasaptami, the governor once again criticized the state government. The role of IAS and IPS in the state was also questioned. Let us tell you that since becoming the Governor of Bengal, the Governor has been continuously targeting Mamta government and government officials, although in recent days he kept silence from political rhetoric.

I am hurt by the weakening of democratic values

The Governor said, “I am deeply hurt, disturbed by the dilution of democratic norms and values. Human rights are not being followed in the state. There is no accountability and transparency. The bureaucrats here are political servants, not public servants. He said that after becoming the governor, he has come to North Bengal many times. The Raj Bhavan here has been opened for the common people. Cultural programs have also taken place. I am deeply hurt as a constitutional head and attracted by the media about the violation of democratic rules. Accountability and transparency is at the lowest level of the bureaucracy. IPS, IAS officers and Chief Secretary are indifferent towards the rule of law and governor. Which documents should be available to all citizens. They have not been made available to the constitutional head. He has warned the Chief Secretary about this.

The Governor has been continuously raising questions on the Mamta government regarding the law and order situation in Bengal. He has repeatedly said that incidents of violence are taking place in the state one after the other while the police remains a mute spectator. She is not arresting the culprits. He had also targeted the Mamta government for the incidents of violence in Bengal after the elections and went to Delhi and submitted his report to Union Home Minister Amit Shah. On the other hand, Trinamool Congress has also been vocal against the governor. Trinamool leaders have directly called him an agent of BJP.