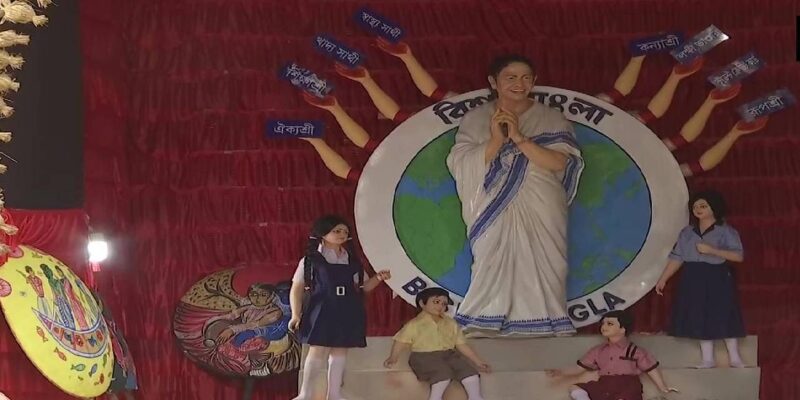 Photo: A worship committee of North 24 Parganas district has made a statue of Mother Durga in the form of CM Mamata Banerjee.

Durga Puja of West Bengal (West Bengal Durga Puja) in Durga Puja pandals (Durga Puja Pandals) is decorated in various forms. Somewhere, Durga pandals have been decorated on the same theme to support the farmers’ movement, somewhere there are puja pandals narrating the pain of NRC, and somewhere worship themes have been made regarding the corona virus. At the same time, in a puja pandal in North 24 Parganas district of West Bengal, CM Mamta Banerjee (Mamata Banerjee) has been made in the form of Mother Durga, in whose ten hands ten schemes of Mamta government have been decorated.

Durga Puja organizers have put up a statue of Chief Minister Mamata Banerjee, in which Mamta’s ten hands are shown at Baguihati Nazrul Park in North 24 Parganas of Bengal. In each hand of this statue of Mamta, a plan of the Bengal government has been depicted.

Maa Durga in the form of Mamta Banerjee

“Each hand of the idol represents one of her govt’s initiatives such as Lakhi Bhandar & others,” says Indranath Bagui, President, Baguiati Nazrul Park Unnayan Samiti pic.twitter.com/U3xOfyeCBM

Regarding this statue of Mamata Banerjee, Nazrul Park Unnayan Samiti President Indranath Bagui said, “Each hand of the idol represents one of the initiatives of Lakkhi Bhandar and other similar government.” It should be noted that this area is considered to be a stronghold of Mamata Banerjee and TMC and many schemes have been started by Mamata Banerjee’s government to woo the people.

A committee in Birbhum has prepared Durga Puja pandal on the basis of state government’s scheme ‘Lakkhi Bhandar’. Puja organizer Dewasi Sah told that this year’s theme is ‘Lakkhi Bhandar’, which is inspired by Mamata Banerjee’s plan to support poor and backward women. Let us tell you that Bengal CM Mamta Banerjee has announced to start ‘Lakhi Bhandar Yojana’ to woo women. Under this, Rs 1000 per month will be given to the women of scheduled caste and tribe and Rs 500 per month to the women of general category. Forms have been filled from place to place for this scheme and this amount will be given soon.